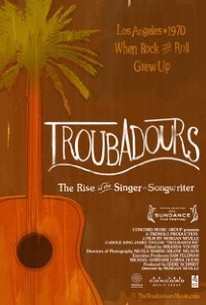 The 1970s singer/songwriter movement in California and the history of the "world famous" Troubadour club in Los Angeles are chronicled in this documentary featuring Carole King and James Taylor. The stories of King and Taylor's professional partnership, their artistic successes, and the part that the Troubadour played in launching their careers are recounted. Archival footage is included from the club that hosted "new talent" such as Elton John, David Crosby, Jackson Browne, Richard Pryor, and Steve Martin.

An infectiously fond look at a mellow moment in rock history.

Watching the warmly nostalgic "Troubadours" is like going to a reunion of old friends. You're so happy to see them again that you are willing to forgive whatever lapses and flaws there are in the experience.

In the end, as another talking head points out, "the music always wins." And it did -- by a landslide.

The film is entertaining but hardly penetrating.

A key weakness of the documentary is that it doesn't do enough to refute the charges long leveled at the Laurel Canyon league by music critics.

It's woeful as a documentary history -- a real missed opportunity.

Troubadours gets off on vague talk about community and a generous helping of tunes.

Troubadours is an amiable endeavor, if something of a puff piece.

For any music lover, this doc offers sheer bliss and a warm bath of nostalgia for the '70s era of L.A.-based singer-songwriters.

It is frustrating to realize how little we learn from this superficial (and sadly conventional) documentary, as it drifts unfocussedly from topic to topic without delving far enough into any of them and cannot even explain why the music critics disliked those singers so much.

Compelled me to dig out my old Carol King and Joni Mitchell albums. Required viewing for fans of the 70's singer/songwriter era.