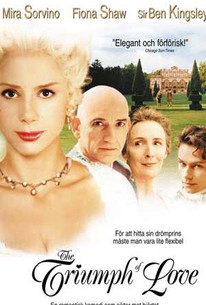 Critics Consensus: Not as charming as it could have been, Triumph of Love plays too broadly and amounts to little more than a trifle.

Critics Consensus: Not as charming as it could have been, Triumph of Love plays too broadly and amounts to little more than a trifle.

Critic Consensus: Not as charming as it could have been, Triumph of Love plays too broadly and amounts to little more than a trifle.

The Triumph of Love Photos

A beautiful princess (Mira Sorvino) whose throne is threatened falls in love at first sight with the rightful heir to the throne, a lonely young man named Agis (Jay Rodan), in Clare Peploe's romantic comedy Triumph of Love. The film was adapted from an 18th century play by Marivaux. Peploe's husband, Bernardo Bertolucci, co-wrote the script and produced the film, which was shot, mostly handheld, on 16 mm. Sorvino plays a princess whose father murdered the father of Agis and took his power. Her enemies are preparing to correct that historical wrong, but when the princess boldly investigates, she finds herself smitten with the handsome Agis. Agis has been raised by a vainglorious philosopher, Hermocrates (Ben Kingsley), who kept Agis secluded on his estate for his own safety. Hermocrates has furthermore sternly taught Agis that romance and love are the downfall of the intellectual, and that women in general are not to be trusted. Hermocrates also has a retiring spinster sister, Leontine (Fiona Shaw of Harry Potter), who conducts science experiments in her spare time. The princess, accompanied by her faithful handmaiden, Hermidas (Rachael Stirling, the daughter of actress Diana Rigg), disguises herself as a male philosophy student, Phocion, in order to infiltrate Hermocrates' household. She plans to both revenge herself on her enemies, and win the hand of Agis, uniting her kingdom. In this guise, she befriends the naïve Agis and seduces the fragile Leontine. Hermocrates, however, immediately recognizes her true gender. Still, she manages to appeal to his gigantic ego, explaining that she's madly in love with him, and believes that only his genius can show her the wrongfulness of that state. As the threads of her plan chaotically and comically come together, the princess finds herself haunted by her own conscience.

Mira Sorvino
as The Princess

Carlo Marcoccia
as Shepherd
View All

Critic Reviews for The Triumph of Love

I was periodically put off by a certain self-consciousness of delivery.

The characters in Triumph of Love are trifles, so that the farcical situation, which depends on the audience buying quick changes of heart -- like falling in love in an instant -- has no resonance.

In short, a film dependent on deception relies on the Clark Kent school of disguise, and it doesn't work.

It could have been something special, but two things drag it down to mediocrity -- director Clare Peploe's misunderstanding of Marivaux's rhythms, and Mira Sorvino's limitations as a classical actress.

This story of false identities set in the grounds of a luxurious (and remarkably empty) stately home feels like a rehearsal for the real thing.

The characters jabber away, the premise becomes ever more improbable, and you may well find yourself drifting to sleep.

This gender-bending romp is enjoyably witty, even if it feels rather long and pointless.

It is the audience who will feel duped even more than the characters in the film.

Audience Reviews for The Triumph of Love

There are no featured audience reviews yet. Click the link below to see what others say about The Triumph of Love!

The Triumph of Love Quotes