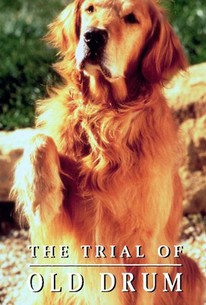 The Trial of Old Drum Photos

In the 1950s, a young boy, Charlie Burden Jr. (Bobby Edner), and his Golden Retriever known as Drum, share adventures in their rural town, many of which require the dog to save the boy's life: they have a boating accident and the dog pulls him from the lake; they encounter a pack of wild dogs and the dog slays them, but is gravely wounded. Then they run head-long into a grumpy old neighbor (John Schuck), who is convinced Drum has been killing his sheep. Like Dorothy's Toto, Drum is hauled away to be executed, but Charlie's dad (Ron Perlman) hires gilded tongue attorney George Graham Vest (Scott Bakula) to defend the canine before a jury and a judge. Vest's climactic closing argument had better be good, or they'll be playing "Taps" for Drum.

Hari Oziol
as Mike
View All

Critic Reviews for The Trial of Old Drum

Audience Reviews for The Trial of Old Drum

There are no featured audience reviews yet. Click the link below to see what others say about The Trial of Old Drum!

The Trial of Old Drum Quotes