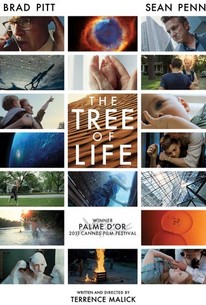 Critics Consensus: Terrence Malick's singularly deliberate style may prove unrewarding for some, but for patient viewers, Tree of Life is an emotional as well as visual treat.

Critics Consensus: Terrence Malick's singularly deliberate style may prove unrewarding for some, but for patient viewers, Tree of Life is an emotional as well as visual treat.

Critic Consensus: Terrence Malick's singularly deliberate style may prove unrewarding for some, but for patient viewers, Tree of Life is an emotional as well as visual treat.

The Tree of Life Photos

From Terrence Malick, the acclaimed director of such classic films as Badlands, Days of Heaven and The Thin Red Line, The Tree of Life is the impressionistic story of a Midwestern family in the 1950's. The film follows the life journey of the eldest son, Jack, through the innocence of childhood to his disillusioned adult years as he tries to reconcile a complicated relationship with his father (Brad Pitt). Jack (played as an adult by Sean Penn) finds himself a lost soul in the modern world, seeking answers to the origins and meaning of life while questioning the existence of faith. Through Malick's signature imagery, we see how both brute nature and spiritual grace shape not only our lives as individuals and families, but all life. -- (C) Fox Searchlight

Thomas Pavlechko
as Hand Double for Mr. Pitt
View All

News & Interviews for The Tree of Life

View All The Tree of Life News

Critic Reviews for The Tree of Life

The tone of the film is mesmeric, transcendent, awe-inspiring.

Nobody else [but Malick] could have made it. Few would even dare to try.

An extraordinary vision of first contact, not between two cultures but between a soul and the universe.

One for the history books.

All that really emerges is that Terrence Malick...has, Stanley Kubrick-style, fermented into a filmmaker with a glacial output who begs to be deciphered rather than enjoyed.

This film's rewards are many, for those with the patience to simply let it float.

"The Tree of Life" is breathtaking to look at, it really is stunning, but it is really just 138 minutes of whispering about God.

It is shown with a wonder of emotion and visual beauty, together with sublime images that symbolize catharsis. [Full review in Spanish]

Simultaneously micro and macro, the story of everything told in a single blade of grass.

Malick's earnest pretentiousness surely invites derisive laughter. But it also withstands it, and like the ancient evergreen of its title, it towers benevolently over less ambitious movies...

The Tree of Life is a singular cinematic experience.

The Tree of Life may not be perfect, but it is as close to essential viewing for anyone interested in the progress of American cinema as an art form as anything you're likely to come across for a long while.

Audience Reviews for The Tree of Life

With breathtaking visuals and an emotionally compelling story, this is a magnificent spectacle that confronts the smallness of mankind with the majesty of the universe - and a mesmerizing, transcendental ballet of images that attempt to evoke the true essence of the Divine.

The Tree of Life Quotes