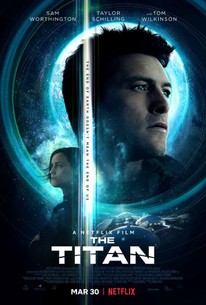 In the near future, a military family is chosen to participate in a ground-breaking experiment to accelerate man's genetic evolution in order to relocate humanity to another planet.

Critic Reviews for The Titan

The body horror genre thrives on disgust, shame and goo, all qualities lacking in The Titan.

Avatar's Sam Worthington is at his most charmless, seemingly channelling a slightly aggressive sirloin as he plays the dead-eyed ex-marine Rick Janssen...

It should lead somewhere dramatically, and this is anticlimactic.

Steals ideas from films as diverse as The Fly, Avatar, Soylent Green and Prometheus before fumbling every last one of them, and looks as if it was shot in a show home for 99.

The Titan is disappointingly earthbound fare.

Low budgets are no excuse for aiming so low when it comes to your concepts and characterisation.

The Titan sets up a surprisingly solid, anxious story about the dangers and possibilities of scientific experimentation and space travel, but drops most of its intellect as it closes, making for a mixed bag of a film sadly concluding in disappointment.

It may not always work on all levels but at least it's prepared to take risks.

At first, it seems like the film is going to make good on its sci-fi thriller premise before it devolves into a boring, silly monster movie.

A drab, rudderless movie that calls on its star to splice some life into the reanimated DNA.

The Titan takes a timely and tantalizing premise about finding a new home after Earth becomes uninhabitable and squanders it completely.

With Sam Worthington leading a rather unconvincing cast, the first half genuinely intrigues but the Earthbound story falters as things, er, evolve.

Audience Reviews for The Titan

Although begun with an interesting premise, that of engineering the species for life off-Earth, the follow-through is lethargic and uninspired. Tom Wilkinson does well as the scientist behind the idea, but he's done this kind of thing before and better, and there's just not enough going here to justify your time.

This is an odd film that never attempts to escape the cliché riddled exposition it has at its core. The film has been done before, maybe not in the same storyline but definitely as a creator defending his own creation. The filmmakers might have been better off focusing on the darker elements of the testing as they only have Worthington as the main focus. The script is quite weak and when the inevitable occurs, predictably of course, you just never click with anything that happens after that. I thought this might be a good sci fi film but Netflix has put their brand behind another subpar film that would've been ignored at the cinemas. Poor filmmaking can't resurrect a dire project, the cast was better served not signing on in the first place. 31-03-2018.