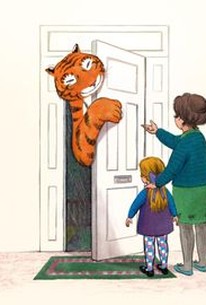 The Tiger Who Came to Tea Photos

Open the door and get ready to roar for a classic, fantastical animated adventure this Christmas. Based on the best-selling classic picture book, written and illustrated by the revered Judith Kerr OBE, The Tiger Who Came to Tea follows a tea-guzzling tiger, who turns up unannounced and eats and drinks Sophie and Mummy out of house, home and bath water before disappearing into the night. Inspired by Judith's daughter Tacy, the story of Sophie and her extraordinary, stripy teatime guest has enchanted generations of children and has become a timeless classic, having sold over five million copies since it was first published by Harper Collins Children's books in 1968.

Critic Reviews for The Tiger Who Came to Tea

Child actor Clara Ross was a lovely, natural Sophie. The rest of the cast, including Tamsin Greig and Benedict Cumberbatch, were understated. Even the Robbie Williams song was pleasingly restrained.

Just as in the original, the whimsical exuberance finally mutates into a wistful melancholy. This feels like an instant Christmas classic.

There were a lot of new bits, but every beloved beat was there.

The result is lovely.

Kerr, having overseen the project, had ensured everything knitted together into the cosiest of Christmas jumpers. I'll wager we will be seeing the tea-taking tiger again.

Although the film is set on a summery day, the broadcaster's Christmas Eve offering perfectly captures the nostalgia that many viewers will be looking for during the festive season.

There are no featured reviews for The Tiger Who Came to Tea at this time.

The Tiger Who Came to Tea Quotes