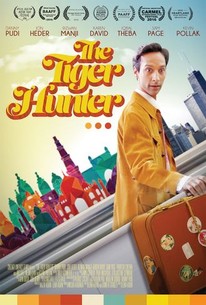 News & Interviews for The Tiger Hunter

Kingsman: The Golden Circle Is a Flat Follow-Up

View All The Tiger Hunter News

Critic Reviews for The Tiger Hunter

As a feel good dramatic comedy, The Tiger Hunter hits most of the right notes while only sounding a few sour ones.

There's enough good-naturedness and cultural specificity here, alongside a slight deviation from the usual immigrant narratives, to render it a dollop of sweetness and novelty that goes down easy.

There has been no shortage of films tracking the immigrant pursuit of the American dream, but few have been as laugh-out-loud delightful as "The Tiger Hunter," a sparkling first feature by Lena Khan.

An encouraging look at the American Dream, at a time when it too often seems like a nightmare.

"The Tiger Hunter" might balk at the harsher details of immigrant life, but it has a generosity of spirit that lifts everyone up.

Immigrant stories certainly don't demand tragedy to be legitimate, but The Tiger Hunter, with its pastiche of fish-out-of-water comedy and pointy collared shirts, ultimately feels weightless.

At a time when immigrants are seen as nothing more than human fodder for political warfare, the kindness of The Tiger Hunter and its celebration of immigrants and their difficult struggle into a new land is more than welcome.

The jokes may unanimously fall flat, and The Tiger Hunter may offer no new insight into the immigrant experience, but it has a feel good, positive nature that redeems itself somewhat.

The moral of the story, which I actually agree with, is "being happy is finding greatness in how you live." I'll give the film that.

This lighthearted dramedy treads the stalest, most worn-out story grooves imaginable, but thanks to its cultural sensitivity and sweetly lovable characters, it's very difficult not to like.

A sweet, charming little picture. Danny Pudi is winning in the lead role.

The brightest point of The Tiger Hunter is Pudi, often the best thing in good television shows that either burned out (Community) or never quite caught fire (Powerless), finally getting a chance to shine as a leading man. He's always worth hunting down.

Audience Reviews for The Tiger Hunter