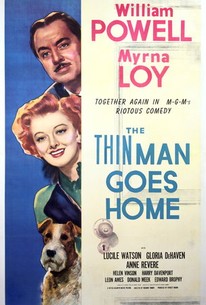 This fifth entry in MGM's off-and-on "Thin Man" series maintains the high production and story values of the first four. Per the title, retired private detective Nick Charles (William Powell) pays a visit to his home town of Sycamore Springs, with wife Nora (Myrna Loy) in tow. Poor Nick is amusingly browbeaten by his parents (Harry Davenport and Lucile Watson), who wanted their boy to study medicine, is frustrated by the fact that there isn't a good stiff drink to be had in town, and is hilariously defeated by a recalcitrant hammock. In a more serious vein, Nick and Nora become involved in international intrigue while investigating the murder of a local house painter. If the identity of the murderer seems obvious today, it is only because the actor in question has played so many "surprise killers" in other films of this genre. A refreshing change of pace for the usually urbanized "Thin Man" series, The Thin Man Goes Home features such colorful suspects as Gloria DeHaven, Edward Brophy, Lloyd Corrigan, Leon Ames, and, best of all, Ann Revere as a local eccentric named "Crazy Mary".

Connie Gilchrist
as Woman with baby

Irving Bacon
as Tom the Proprietor

Bert May
as Sailor

Ray Teal
as Man
View All

More in keeping with a classic British mystery

By the time The Thin Man Goes Home rolled around, the series was beginning to feel pretty thin itself.

The Nick and Nora Charles crime formula story works even in the sticks.

Another good, fun, and humorous sequel to the Thin Man.

The Thin Man Goes Home is the fifth Thin Man film and it's evident the series is running out of steam. There's a whole lot more slapstick and puppy comedy involving the dog, but the "mystery" involving a mysterious painting and of course, a couple of murders is just sort of background side story. I know the Thin Man series relies on the humor and chemistry generated by Loy and Powell, but there also have to be situations that are humorous too. Here, the situations are straining to be funny, but don't quite live up to the previous films. Some of the things the super-sleuth uncovers seem far-fetched, even for a Thin Man movie. Possibly the weakest of the Thin Man movies.

Sort of the Thin Man series meets the Andy Hardy series. Good studio fun. "Nick, you have to do something... and that's not it!"

A great installment and one of the best of the Thin Man series. A lot better than you'd expect considering this is the fifth in the series and a different director is at the helm. No kid involved but we meet Nick's parents, namely his passive-aggressively disapproving father. Not a drink is served throughout the entire movie and because of that you're expecting The Thin Man Goes Home to suck, which strangely enough never happens. The Thin Man Dries Out. There are a lot of funny moments, namely Nora's delivery of the Stinky Davis case which is easily one the best moments in the entire series. Even if you're not a big fan of the series you should check it out. It's a perfect blend of screwball comedy and detective story.