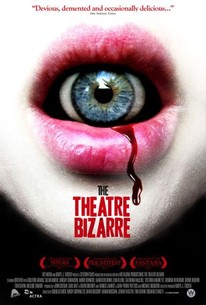 Down a seedy city street, a young woman is obsessed with what appears to be a long abandoned theatre. One night, she sees the front door slightly ajar and impulsively decides to sneak inside. But there in the vast, eerie auditorium, a show unlike any other unfolds before her eyes. Its host is an odd marionette-like man who will introduce her to six tales of the truly bizarre: A couple traveling in a remote part of the French Pyrenees crosses paths with a lustful witch; A paranoid lover faces the wrath of a partner who has been pushed to her limit; The Freudian dreams of an unfaithful husband blur the lines between fantasy and reality; The horrors of the real world are interpreted through the mind of a child; A woman addicted to other people's memories gets her fix through the fluid of her victims' eyeballs; And a perverse obsession with sweets turns sour for a couple in too deep. But as the stories unfold, something strange is happening to the woman. Something irreversible and horrific. -- (C) W2

Catriona MacColl
as Mère Antoinette (The Mother of Toads)

Shane Woodward
as Martin (The Mother of Toads)

Victoria Maurette
as Karina (The Mother of Toads)

Lisa Crawford
as The Naked Witch (The Mother of Toads)

Amélie Salomon
as The Monster (The Mother of Toads)

André Hennicke
as Axel (I Love You)

Suzan Anbeh
as Mo (I Love You)

Harvey Friedman
as George (I Love You)

Cynthia Barcomi
as Mo's Sister (I Love You)

Christian Maria Goebel
as Mo's Brother-in-law (I Love You)

Lena Kleine
as Mother (The Accident)

Melodie Simmard
as Daughter (The Accident)

Critic Reviews for The Theatre Bizarre

These elements may be shocking and even bizarre. But, like a lot of midnight-movie provocations, they soon turn predictable.

An impressively good hit-to-miss ratio ... Entirely worth a horror fan's time, but is probably too erratic and violent a film for the casual enthusiast.

The Theatre Bizarre is a delicious horror buffet with some gore-geous treats and gruesome confections.

As with most anthology efforts, only a few of the segments truly shine, yet the production as a whole carries itself confidently and shares a few scattered pleasures.

Absent anything scary or even shocking, the only question is why Enola sticks around for all six shorts. Or why the filmmakers think we would.

A macabre horror anthology that suffers from a couple weak entries weighing it down, but still compares relatively favorably to the qualitative mean established by Anchor Bay's 'Masters of Horror' series a few years back.

Several of the segments make up for their lack of polish with a clear relish for their genre.

Audience Reviews for The Theatre Bizarre

Grotesque, dark, creepy and (living up to its title) very bizarre indeed. Some stories felt vapid, yes, while some were interesting and bizarre enough to satisfy every horror fan as myself. The gores were over-the-top and very painful to watch that it felt uncomfortably good. The Theater Bizarre has made me stand to my seat and scream for an encore.