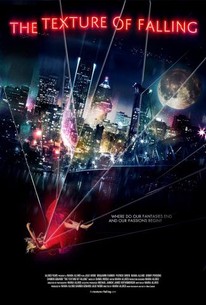 The Texture of Falling is unlike any film that you've ever seen. Set against the lush landscape of the Pacific Northwest, part psychological drama and part sexual thriller, it's a film that transcends genre and defies classification. It follows Louisa (Julie Webb) as a filmmaker reeling from a recent professional dejection, who meets Luke (Patrick Green), a pianist experiencing his own artistic crisis. Despite a long-term relationship with Ati, (Donny Persons), Louisa is intrigued by Luke. As Louisa falls for him, her skepticism of romantic love begins to unravel as she surrenders to her passions. But as Louisa and Luke's romance blooms, a simultaneous story arises as Michael (Benjamin Farmer), a wayward architect estranged from his wife, meets Sylvia, an enigmatic painter. But are these parallels merely a coincidence? Soon Michael and Sylvia embark on a verboten journey of pleasure and pain. But who is Sylvia? As Michael's lust crescendos, he realizes that he has chosen the elusive. In The Texture of Falling, nothing is what it seems. From its opening shot to its startling climax, the film inverts all expectations. Marking the audacious, unforgettable debut of its writer-director-actor, Maria Allred, it is a visual tour-de-force -- a film that challenges our ideas of romantic boundaries and taboo love. It asks what is real and what is artifice. Where do our fantasies end and our passions begin?

Critic Reviews for The Texture of Falling

"The texture of falling" is a phrase that sounds cool but means nothing, and that's a good description of this film as well.

The Texture of Falling is ultimately as beguiling as it is frustrating, with curiosity and a fascination for Allred's visual style compensating for a storyline the proves difficult to navigate.

Allred's fractured storytelling seems intended to make the movie a sort of puzzle that comes together at the end (spoiler alert: it so doesn't).

The acting was so terrible, the plot so muddled and the reveal so underwhelming that as hard as I tried, I couldn't.

The Texture of Falling's ambition can't be understated, but the hyper-stylized execution leans too heavy on the sound and fury.

The two storylines don't seem to have a lot in common or connect in any way, but that changes near the end. Meanwhile, there are a lot of short, slightly disjointed scenes and a soundtrack that would be at home in a psychological thriller or horror film.

Drivel attempting to be looked at as groundbreaking. "Have you ever been addicted to people?" is typical dialogue.

Audience Reviews for The Texture of Falling

There are no featured audience reviews yet. Click the link below to see what others say about The Texture of Falling!

The Texture of Falling Quotes