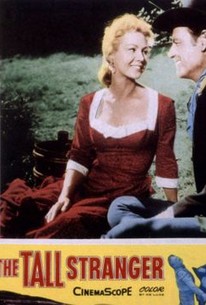 Joel McCrea essays the title role in this moody little western. McCrea is a Union officer wounded in battle, who joins up with a wagon train heading westward. He is ostracized by those passengers who'd fought on the Confederate side, though leading lady Virginia Mayo welcomes his presence. McCrea redeems himself in the eyes of the ex-Confederate homesteaders when he acts as mediator in a range dispute with a land baron (Barry Kelly)--who happens to be McCrea's own half brother. Tall Stranger is based on a novel by the prolific Louis L'Amour.

Philip Phillips
as Will

Danny Sands
as Settler
View All

Critic Reviews for The Tall Stranger

More interesting than it had a right to be.

There are no featured reviews for The Tall Stranger at this time.