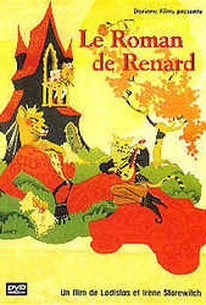 The film for this rare full-length animated feature was fully developed and shot by 1930 - just when sound was beginning to be heard in movies. It was made by the nearly legendary animator Ladislas Starevich, a Russian-born Pole who worked almost exclusively in France; this was his only full-length feature. The original plan was for it to be shown with a coordinated soundtrack played on records, but technology outpaced those plans, and the film was put in storage until several years later. In 1939, the cartoon characters were given voices by well-known French actors, a musical score was composed, and the film was released in Paris in the winter of 1940-41. The master prints of this witty cartoon, which is amusing both for the young and for adults (who are the only ones who will get many of the jokes) were retrieved from the animator's estate and restored for re-release in 1990. In the story, Renard the fox is a charming creature who is so very clever that he often outsmarts even himself. Practically every animal in the kingdom has some complaint about being bamboozled by him, but when he flim-flams the king himself, something must be done. The king attacks Renard's castle, which is ingeniously (if ineffectively) defended. Once Renard is captured the king can't bring himself to harshly punish the errant rogue, and instead makes him his prime minister. ~ Clarke Fountain, Rovi

The passing years have robbed it of none of its capacity to enchant and amuse.

This vintage animated film impresses, first of all, by the sheer virtuosity of its stop-motion puppet work.

Basically as amazing to me as that time Leonardo da Vinci invented the helicopter.

It's chiefly a mechanical triumph.

One of the greatest animated films ever created.

this was starewicz's only feature, a stop-motion masterpiece based on the medieval tales of reynard. brilliant, beautiful, on youtube... http://youtu.be/rz0wAD1o0gs

The Tale of the Fox (Le Roman de Renard) Quotes