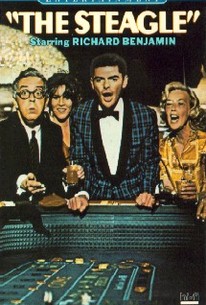 In this comedy, Harold Weiss (Richard Benjamin) is a professor at the time of the Cuban Missile Crisis in 1962, when a nuclear holocaust seemed imminent. Rather than sit around waiting to die, he decides to drive from Long Island to Los Angeles, taking in such sights as Las Vegas along the way. As he travels, he assumes different momentary identities which he uses--to humorous effect--in his interactions with the people he meets. This story is captured in a number of short sketch-like episodes, as the professor acts out his fantasies with increasing abandon.

Critic Reviews for The Steagle

The Steagle is another movie about alienation and not a very good one. With so much alienation on screen is it any wonder that audiences are beginning to feel alienated?

There are no featured reviews for The Steagle at this time.