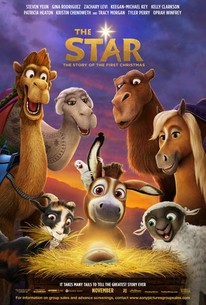 Critics Consensus: The Star may not leave audiences singing "Hallelujah," but its offbeat yet sincere approach to the nativity story makes for acceptably diverting holiday viewing.

Critics Consensus: The Star may not leave audiences singing "Hallelujah," but its offbeat yet sincere approach to the nativity story makes for acceptably diverting holiday viewing.

Critic Consensus: The Star may not leave audiences singing "Hallelujah," but its offbeat yet sincere approach to the nativity story makes for acceptably diverting holiday viewing.

In Sony Pictures Animation's THE STAR, a small but brave donkey named Bo yearns for a life beyond his daily grind at the village mill. One day he finds the courage to break free, and finally goes on the adventure of his dreams. On his journey, he teams up with Ruth, a lovable sheep who has lost her flock, and Dave, a dove with lofty aspirations. Along with three wisecracking camels and some eccentric stable animals, Bo and his new friends follow the Star and become unlikely heroes in the greatest story ever told - the first Christmas. THE STAR is directed by Academy Award (R) nominated writer/director Timothy Reckart (HEAD OVER HEELS); executive-produced by DeVon Franklin (MIRACLES FROM HEAVEN), Lisa Henson and Brian Henson (The Jim Henson Company); produced by Jenni Magee Cook; with a story by Carlos Kotkin and Simon Moore; and screenplay by Carlos Kotkin. Digital animation by Cinesite Studios.

Steven Yeun
as Bo the donkey

Keegan-Michael Key
as Dave the dove

Kelly Clarkson
as Leah the horse

Anthony Anderson
as Zach the goat

Aidy Bryant
as Ruth the sheep

Ving Rhames
as Thaddeus the dog

Gabriel Iglesias
as Rufus the dog

Patricia Heaton
as Edith the cow

Kristin Chenoweth
as Abby the mouse

News & Interviews for The Star

View All The Star News

Critic Reviews for The Star

This thin storyline is padded out with subplots that showcase a bizarrely star-studded voice cast.

Why has nobody thought of this before - the Nativity retold for kids via knockabout animal animation and gloopy pop ballads? Oh yes, because it's an absolutely dreadful idea.

Some future shelf life in seminaries seems likely, but as festive treats for kids go, it's like asking for a selection box and being force fed communion wafers instead.

Delivers ... a preachy, bland and fastidiously inoffensive kind of ersatz fun - a little like those knock-off Christian video games from the early 1990s that mimicked existing hits, but which made you pray for people instead of shoot them.

Unless you have tiny, religious children, it's probably best to avoid it.

All told, The Star should be a safe bet for families during the upcoming holiday season.

Not a lot of enjoyable moments for adults to engage with but families may enjoy watching, as it is a kid-friendly telling of the birth of Jesus.

A weird and off-putting story conceit that doesn't add anything new to one of the most often-told stories of modern times.

Its novel approach will undoubtedly appeal to the very young ones, with enough charm, heart and humour to entertain the adult members of the audience.

The humor completely falls flat in The Star.

If you want to watch a children's film based on a biblical story, I'm sorry to say that was made 20 years go with a movie called "The Prince of Egypt."

Successfully helps to fill that Christian focused Christmas movie void with a fun adventure for children with a message that will resonate with parents.

Audience Reviews for The Star

From Sony Animation comes a fun, new telling of the Nativity Story in The Star. The film follows a donkey who escapes from the mill and is taken in by newlyweds Mary and Joseph, and soon becomes torn between following his dream of joining the Royal Caravan and helping his new friends. Featuring the voice talents of Zachary Levi, Christopher Plummer, Kelly Clarkson, and Kristin Chenoweth, the film is fairly well cast. And, the animation style is pretty good; with some charming and cute character designs for the various animals that gives them personality. However the music is rather intrusive, really drawing attention to itself (pushing the soundtrack). Also, the message of the Nativity Story is a little watered down; but given that it's aimed at kids, that's somewhat to be expected. The Star isn't perfect, but it's an entertaining film that the whole family can enjoy.

In The Star, the latest production from Sony Pictures Animation (Cloudy with a Chance of Meatballs, Arthur Christmas), we are introduced to a sheep named Ruth (voiced by SNL's Aidy Bryant) who has essentially defected from her flock because of the titular star, an unusually bright heavenly body that showed up around the same time the angel Gabriel appeared to Mary in Nazareth to inform her she was highly favored and would be carrying and raising the son of God. Ruth can't help but to feel the appearance of this star is significant in a way she can't describe or pinpoint, but rather it is something she inherently feels she can't ignore. Ruth follows this feeling even when the rest of her flock continue to travel with their herd. This more or less makes Ruth the greatest embodiment of what true, genuine faith looks like in The Star and while this is a movie based around the nativity story in a way children might be able to more easily access it, this is the greatest virtue it has to offer. Admittedly, the idea of going against the grain, rebelling against the norm for the sake of something you truly believe in is something of a common theme in children's entertainment so as to promote individuality (this is the arc played by our main character, a donkey named Bo (Steven Yeun), actually), but there is a difference in doing something out of desire or drive for the satisfaction of your own life and being able to give of your own life for a purpose you believe is greater than yourself and that is what comes to be the most evident about Ruth in The Star. Ruth exemplifies a selflessness in service of this unwavering faith in something that struck her upon seeing that star start shining in the sky; a feeling she can't explain other than to describe the fact it stirs something inside of her. But faith has always been about not having the right answers, but rather a feeling. A hunch, really. It's a hunch that there is something bigger connecting it all and connecting us all together. For Ruth, and eventually Bo and several other animals that bear witness to the events that take place in The Star that feeling, that hunch, turns out to be God. read the whole review at www.reviewsfromabed.com

For those who might be looking for some stories at least based on Christianity itself, The Star is something for you to see. Otherwise, all together what it makes is a huge forgettable movie that never attempts to shine to victory compared to the other movies.