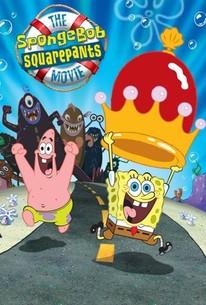 Critics Consensus: Surreally goofy and entertaining for both children and their parents.

Critics Consensus: Surreally goofy and entertaining for both children and their parents.

Critic Consensus: Surreally goofy and entertaining for both children and their parents.

Something nefarious is afloat in the depths of Bikini Bottom: King Neptune's crown has been stolen, and the prime suspect is Mr. Krabs, SpongeBob's boss at Mr. Krabs' Krabby Patties. Despite the overwhelming evidence against Mr. Krabs -- not to mention having been turned down for a long-awaited promotion at the restaurant -- SpongeBob (voice of Tom Kenny) refuses to believe that his boss is responsible and teams up with his best friend, Patrick (voice of Bill Fagerbakke), on a mission to Shell City, where he hopes he can exonerate Mr. Krabs and return the crown to its rightful owner. Of course, this is no easy task; once outside the safety of Bikini Bottom, SpongeBob is faced with the overwhelming dangers of the sea, not the least of which being a cyclops that many believe to be responsible for the deaths of countless other unfortunate sea-creatures who ventured outside county lines. Among those who lent their vocal chords to the film include Scarlett Johansson, Jeffrey Tambor, and Alec Baldwin. ~ Tracie Cooper, Rovi

Kristopher Logan
as Squinty the Pirate

D.P. Fitzgerald
as Bonesy the Pirate

Cole S. McKay
as Scruffy the Pirate (as Cole McKay)
View All

The SpongeBob SquarePants Movie takes on rather too much water during its extended feature-length submersion.

The Nickelodeon cartoon series about an oceanic sponge and his starfish sidekick washes onto the big screen with a tide of weak one-liners, exaggerated reactions, and vaguely nauseating gags.

Anyone expecting anything more risky will be sadly disappointed.

hile there is something a little familiar about the use of a journey narrative, and the hint of an uplifting message at the end of the film, the breezy insouciance, gleeful absurdity and wacky innocence of the series remains.

Even when it misses the mark, SpongeBob drips with originality.

Could SpongeBob, all gangly goodwill and ice cream appetite, be the anarchic savior for our stressed-out times?

As a TV series, Spongebob has proven to be quite entertaining in 30-minute doses. Stretching the running time to 90 minutes doesnt help raise the level of appreciation, though.

As much as I resisted the Bob, I have to admit this is actually a pretty funny film.

The questions that the religious right needs to ask are how and why they ever confused homosexuality with pedophilia. Not only does blurring this issue do gays a disservice, it lets SpongeBob get away with murder.

It's never afraid to break out of movie conventions and revert back to its series randomness and sheer Monty Python-esque humor that made it a hit with kids in the first place.

Probably one of the funniest animated films of all time. The film follows the show very faithfully while adding on some new twists to it and it ends up being probably one of the best, if not the best, TV to movie adaptation. The timing for the jokes are fantastically well pulled off, and they keep me laughing every time I watch the film no matter how many times I watch it. Also the comedic voice acting and characters also add to the humor of the film and it is pulled off very well. Also having the film take place in the live action world for about 15 minutes adds a lot of new material that the film can work with, and the scene is pulled off phenomenally well when adding the cartoon characters to the live action world.

I'm a huge fan of Spongebob seasons 1-3, which is basically the Golden Age of the show. After this film, the show went downhill and now lacks the smartly written humor it had before. Honestly, almost every episode of the first three seasons are great. I come to this film and vent my anger because it's the turning point of the show... into lame, unfunny, trite. But the film itself is alright; the humor is hit and miss.

Spongebob is palatable in twenty-minute doses, but ninety minutes is waaaay too much.