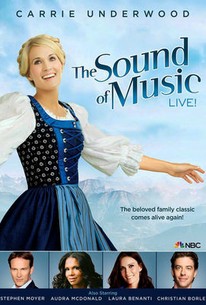 Critics Consensus: The Sound of Music is definitely there, but without the necessary feeling to make it feel truly alive.

Critics Consensus: The Sound of Music is definitely there, but without the necessary feeling to make it feel truly alive.

Critic Consensus: The Sound of Music is definitely there, but without the necessary feeling to make it feel truly alive.

Carrie Underwood and Stephen Moyer star in the live telecast of a beloved family classic, based on the original Broadway musical. -- (C) NBC

News & Interviews for The Sound Of Music Live!

11 Things We Learned About Hairspray Live!

View All The Sound Of Music Live! News

Critic Reviews for The Sound Of Music Live!

It was something I hope they try again. Because in truth, it wasn't good, but I enjoyed it.

Without Underwood and Moyer selling us on this legendary love story, The Sound of Music Live plays like very expensive karaoke.

Considering this was the first live musical theater effort for the medium in 50 years, it ranks as a successful curiosity that may inspire a new generation to explore further.

The Sound Of Music Live! proved that the format can work, even if the product still needs some polishing.

What I liked about The Sound of Music Live was that, for a moment anyhow, it made me forget that it's 2013.

In terms of feeling like this production genuinely delivered, that's one mountain The Sound of Music Live! just couldn't climb.

Telecast of classic has same great music, not as much magic.

Seeing The Sound of Music on DVD minus the live element (and its driving, hate watch-fueled Twitter traffic) makes it seem like an even bigger mess.

This was a pleasurable one-night-only stunt that felt like a major TV event.

If anything, it made me truly appreciate the amazing talent that is Julie Andrews -- and how critical it is to have a talent like this as the lynchpin for a project as important as this one.

This is one of those rare TV events that will be well worth recording or watching live.

For as much as Underwood strained to get some of the musical numbers down pat, it was watching her try to emote as the beloved Maria that was truly the hardest thing to stomach.

Audience Reviews for The Sound Of Music Live!

I like Carrie Underwood as a country pop star, so I was excited to watch, but I was also prepared for a hot awf-some mess. What I got was actually a rather professional and delightful time. The stigma of "strong effort" aside, the performances are not bad at all! Purists who hate-watch are bound to hate it, but they forget that much of the magic of theatre is its mutability. Carrie Underwood belts live with so much power, brightness, and vibrato - which is obviously different from Julie Andrews's graceful soprano, but not BAD per se. Her face is sort of a charisma vacuum in the non-singing scenes, but she does get effectively teary in the emotionally-heightened scenes. I don't know much about Stephen Moyer, but I like his angular looks better than I like Christopher Plummer's whom I found both strict yet slack. Moyer's voice isn't the strongest, but it's at least pleasing to the ear. He's known more as an actor, and he acts well with his whole body through the extra songs that aren't in the movie. Stage and screen veterans, Laura Benanti and Christian Borle, are clearly the most consistent and are given more to do in this stage version. I had never seen a stage production of "The Sound of Music" before, and the [dis]placement of songs cheesed me a little with the repetitive "My Favorite Things," the too-soon "Do-Re-Mi," and the puppet-less "The Lonely Goatherd." I'm also surprised that the film is so long, considering all the good dialogue cut out. Georg, Max, and Elsa and their respective stances on politics are more fleshed out, and Brigitta is a substantial supporting part for a child actor.

The Sound Of Music Live! Quotes