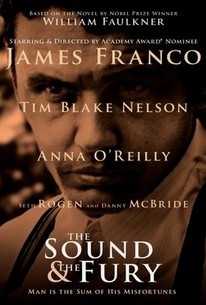 The Sound And The Fury Videos

The Sound And The Fury Photos

This drama captures the lives and passions of the Compsons, a once proud Southern family caught in a tragic spiral of loss and misfortune. Based on the novel by Nobel Prize winner author William Faulkner and considered among the 20th century's greatest works, this film encapsulates the universal theme of the death of honor, social injustice and forbidden love.

Critic Reviews for The Sound And The Fury

This, Franco's most ambitious project, is his best film by far.

Its surfeit of half-baked film-student flourishes and needless cameos occasionally give it an amateur-hour feel. But Franco nonetheless shows improvement over 2013's "As I Lay Dying," and well, it's hard to fault him for trying.

Looking at [Franco's] workload, you wonder when the man switches off. Then you go to the films themselves, and find the answer.

The Sound and the Fury is a step in the right direction for Franco the director, but it still doesn't quite suggest he's on the verge of something truly great. Yet, at least.

One can say that Faulkner is unfilmable, but any work will be unfilmable when it is being adapted by a talentless director.

Matt Hoffman
We Got This Covered

Franco probably has eight other things on the go at the moment (among them no fewer than three upcoming directorial features) which could account for why his "The Sound and the Fury" feels like maybe an eighth of a film.

The Sound And The Fury is a tragedy.

Audience Reviews for The Sound And The Fury

There are no featured audience reviews yet. Click the link below to see what others say about The Sound And The Fury!

The Sound And The Fury Quotes