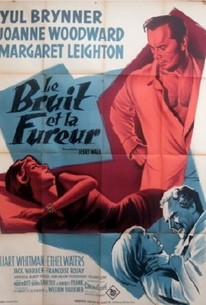 The Sound and the Fury Photos

In this filmed adaptation of William Faulkner's seminal work, Yul Brynner stars as Jason Compson, the oldest son of a once-proud Southern family rife with inner turmoil. His promiscuous sister, Caddy (Margaret Leighton), has suddenly rolled back into town with an illegitimate daughter called Quentin (Joanne Woodward) in tow. Finding no love in her own clan, Quentin opts for a relationship with Charlie Bush, an irresponsible circus worker played by Stuart Whitman. Meanwhile, Ben (Jack Warden), a mentally-handicapped uncle, is a never-ending source of embarrassment for all concerned. Directed by Martin Ritt, this was the first film to be made from The Sound and the Fury. ~ Matthew Tobey, Rovi

Critic Reviews for The Sound and the Fury

The whole cast is magnificent and the color production rates top credits.

The screen edition of the William Faulkner novel is crammed with hifalutin "significance" which somehow never comes into sharp focus.

As a picture of Southern life or a study of human relationships the film utterly fails to convince one, being strangled by local colour and an unwavering belief in the commercial possibilities of the most uncommer- cialised parts of the South,

Audience Reviews for The Sound and the Fury

More time spent in the sultry South, where sex is so alluring simply because there's not a heck of a lot much else to do. Joanne Woodward is a young woman feeling bored by the sameness of her life and by the slow decline of her once respected family and thusly looking for a little pick-me-up, nudge, nudge, wink, wink. Yul Brynner is an outsider, but now running the whole show, if only because he's the only one who cares to. Sure, his Southern accent is for the birds, but he delivers the usual strong performance that holds down the usual languid proceedings Southern Gothic usually takes. Not boring, if ever so predictable.

The Sound and the Fury Quotes