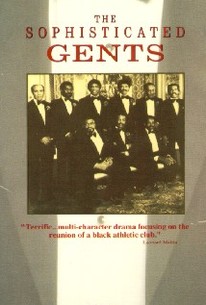 The three-part TV miniseries The Sophisticated Gents covers 25 years in the lives of a group of close friends. Nine African-American members of a sports club gather for a quarter-century reunion. As they reminisce over the high and low points of their lives, some of the members await the arrival of the group's troublemaker with less than enthusiasm. The story comes to an out-of-left-field conclusion involving an escaped killer (Melvin van Peebles) and a pursuing cop. The nine "gents" of the title are played by Ron O'Neal, Thalmus Rasulala, Bernie Casey, Dick Anthony Williams, Raymond St. Jacques, Robert Hooks, Rosey Grier, Paul Winfield...and the aforementioned Melvin van Peebles. Based on John A. Williams' novel The Junior Bachelor Society, the 4-hour The Sophisticated Gents was originally telecast September 29, October 1 and October 2, 1981; for reasons unknown, its debut had been postponed for nearly two years.

Critic Reviews for The Sophisticated Gents

There are no critic reviews yet for The Sophisticated Gents. Keep checking Rotten Tomatoes for updates!

There are no featured reviews for The Sophisticated Gents at this time.