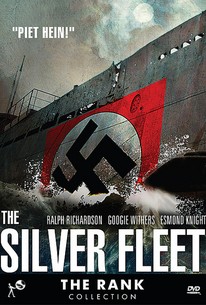 In this war drama set during WW II, an engineer in a Dutch shipyard assists the Nazis with the construction of two new kinds of submarines and finds himself a social pariah. Even his wife turns against her apparently traitorous husband. During the maiden voyage of one of the subs, the engineer talks high-ranking Nazis into joining him aboard their vessel. The Germans are unaware that the engineer has loaded the hapless vessel with dynamite. As that ship explodes, a group of commandos capture the other sub and smuggle it to England.

Philip Leaver
as Chief of Police

Critic Reviews for The Silver Fleet

Many fine qualities of direction, production and acting give this film a moving appeal which rises above improbabilities of plot.

There are no featured reviews for The Silver Fleet at this time.