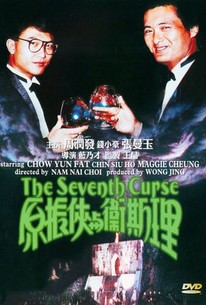 What do a cannibalistic, flying-demon baby, a spine-sucking Worm-tribe god, a blood curse that can only be cured by eating a nipple, and Hong Kong superstar Chow Yun Fat have in common? If you guessed they are all elements of one of the most outrageous and bizarre Hong Kong films of the 1980s, you obviously have a palate for high-camp and way too much time on your hands. Director Ngai Kai-Lam (of Story of Ricky fame) helms this lightning-paced supernatural adventure concerning cognac-sniffing, pulp-fiction heroes Dr. Yuen and Wisely (Andy Lau and Yun Fat respectively). On a frantic mission to cure Lau of the blood curse placed on him by a vengeful witch doctor (his veins periodically erupt into blood-spewing geysers), save the girl, and save 100 local village children from being sacrificed, the heroes battle a multitude of demons, monsters, and horrible curses. Sure, it's derivative of the Indiana Jones series and also lacks the budget needed to fully realize it's outlandish vision, but the film's pacing and originality are sure to please even the most jaded Hong Kong cinema fan.

Ken Boyle
as The Professor

Sibelle Hu
as Su
View All

There are no critic reviews yet for The Seventh Curse (Yuan Zhen-Xia yu Wei Si-Li). Keep checking Rotten Tomatoes for updates!

Awesome! One of my favourite Hong Kong films, this has everything. Ghost fetuses, a cool monster, gore, massive killings, bazookas and Chow Yun Fat. A hell of a lot of fun and highly recommended.