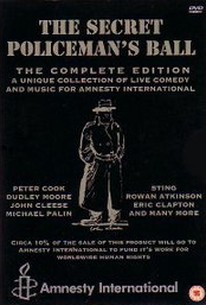 Some of the biggest and brightest stars in British comedy appear in this performance film, which documents a revue staged by John Cleese of Monty Python as a benefit for the human rights group Amnesty International. In addition to Cleese and fellow Python members Michael Palin and Terry Jones (who reprise skits from the Python show as well as its lesser-known predecessor At Last The 1948 Show), The Secret Policeman's Ball includes sketches featuring Rowan Atkinson (shortly before his breakthrough success on the UK television series Not The Nine O'Clock News), Peter Cook (who performs classic material from the show Beyond The Fringe), Eleanor Bron, Clive James and The Kevin Campbell Road Show. The show also includes acoustic musical performances from Pete Townshend of the Who, classical guitarist John Williams (who joins Townshend for a version of "Won't Get Fooled Again") and activist singer/songwriter Tom Robinson. The Secret Policeman's Ball was the third in a series of benefits shows organized by Cleese for Amnesty International, and the name was recycled for several filmed stage shows that followed. ~ Mark Deming, Rovi

Peter Cook
as Himself

Rowan Atkinson
as Himself

Terry Jones
as Himself (uncredited)

There are no critic reviews yet for The Secret Policeman's Ball. Keep checking Rotten Tomatoes for updates!

There are no featured reviews for The Secret Policeman's Ball at this time.