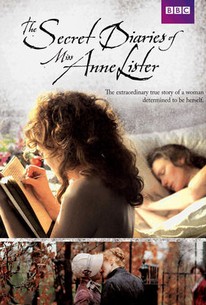 The true story of a woman who boldly lived as she pleased in the 1820s comes to the screen in this historical drama. Anne Lister (Maxine Peake) is a wealthy heiress from West Yorkshire who is nicknamed "Gentleman Jack" by her less charitable neighbors; while Anne is an attractive woman, she often dresses in black, pursues "masculine" hobbies such as shooting, has a keen interest in business and has no interest in marriage, much to the chagrin of her aunt (Gemma Jones) and uncle (Alan David). While Anne is discreet, she prefers the intimate company of women, and she begins a clandestine romance with Marianna (Anna Madeley), another woman from a wealthy family. Anne is heartbroken when Marianna gives in to pressure from her family and weds a rich widower considerably older than herself, but in time Anne finds new love with Ann Walker (Christine Bottomley). However, Anne has a rival for Miss Walker's affections in the spirited Christopher Rawson (Dean Lennox Kelly). The Secret Diaries of Miss Anne Lister was adapted from the true life journals of a British socialite of the early 19th Century; the real Miss Lister wrote her diaries in code, and it wasn't until decades after they were discovered that their full story was revealed. ~ Mark Deming, Rovi

Critic Reviews for The Secret Diaries Of Miss Anne Lister

There are no critic reviews yet for The Secret Diaries Of Miss Anne Lister. Keep checking Rotten Tomatoes for updates!

Audience Reviews for The Secret Diaries Of Miss Anne Lister

The racy recollections of Anne Lister and her efforts to go public with her lesbian relationships are interesting as they show a person clearly out of her time period and out of step with the times. Very strong performances.