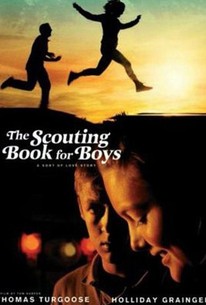 The Scouting Book for Boys Photos

The witty and somber sides of growing up in working-class Britain are explored in this coming of age drama. David (Thomas Turgoose) and Emily (Holliday Grainger) are a pair of teenagers who grew up in the same trailer park in Norfolk. David and Emily have grown to be best friends; his introspective nature is a compliment for her rambunctious side, and they share a fondness for playing tricks on others. However, life hasn't been kind to Emily lately -- her mother (Susan Lynch) has been deemed an unfit parent by the court, and her custody has been awarded to her father (Nick Sidi). Emily isn't happy with this turn of events, and rather than move in with her dad, she disappears. David is worried about Emily's safety until he gets word from her that she's moved into a cave on the outskirts of town. David becomes part of Emily's support system, bringing her provisions, but his deeper feelings for her are hurt when he finds out Emily has a boyfriend, an older man named Steve (Rafe Spall), and that she's pregnant with his child. The Scouting Book For Boys was the first feature film from director Tom Harper.

Critic Reviews for The Scouting Book for Boys

The setting is a seaside caravan site where the acting and directing do not measure up to the script.

Newcomer Tom Harper's direction manages to be both clumsy and overly stylised, while the script by Skins writer Jack Thorne is predictable.

In the end, Scouting Book is a surprise delight, flawlessly cast and nimbly weathering its complex themes.

If you are looking for a showcase of some of the best new talent in British cinema, you need look no farther than this terrific little film.

The narrative isn't entirely convincing, but the powerful and heartfelt performances from Turgoose and Grainger are.

Harper has done enough with this striking, ambitious debut to herald the arrival of a major new filmmaking talent.

By the time this absolute gem of a film reaches its jaw-dropping denouement, you'll want to watch it all over again.

This is a film made with some verve and a real sense of place and atmosphere, but as a character study the main characters lack ...well ...character, I suppose.

Increasingly dark and involving, this British drama tells a gripping story through the eyes of an intriguing teen

Tom Harper's feature debut is a wistful and atmospheric drama, with superb performances from Turgoose and especially Grainger.

First-time director Tom Harper creates a suitably foreboding atmosphere, ensuring that even if the dramatic turns the film takes stretch credibility, the film feels like a sincere reflection of its protagonist's world.

Audience Reviews for The Scouting Book for Boys

There are no featured audience reviews yet. Click the link below to see what others say about The Scouting Book for Boys!

The Scouting Book for Boys Quotes