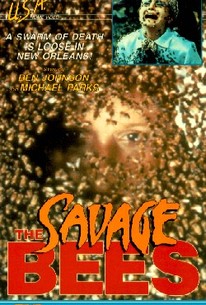 Having already overrun most of South America, a swarm of vicious African killer bees prepares to descend upon the United States. Almost as if rehearsed, the tiny menaces converge on New Orleans during Mardi Gras. With revellers dropping left and right, thanks to the fatal stings of the bees, it is up to the local constabulary, represented by Sheriff McKew (Ben Johnson), and a team of scientists, commandeered by Dr. Mueller (Horst Buchholz), to end the deadly plague for good and all. As usual, however, it is such "civilians" as Jeff DuRand (Michael Parks) and Jeannie Devereaux (Gretchen Corbett) who are best equipped to ward off the buzzing scourges. An Emmy-award winner for Best Sound Mixing, The Savage Bees debuted November 22, 1976, on NBC.

Critic Reviews for The Savage Bees

There are no critic reviews yet for The Savage Bees. Keep checking Rotten Tomatoes for updates!

Audience Reviews for The Savage Bees

There are no featured audience reviews yet. Click the link below to see what others say about The Savage Bees!