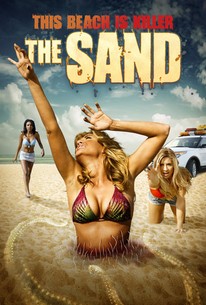 After a raging all-night party, a group of hung over twenty-somethings awakens to a beating sun and a carnivorous beach that devours anything with a heartbeat.

Mitchel Musso
as Mitch
View All

There is nothing to recommend here; as a creature feature (mostly) missing its creature, The Sand is an arduous watch.

The Sand takes a silly idea and somehow makes it work, helped greatly by the fact that it has got buckets of charm.

It takes skill to make a cheesy creature feature well. The Sand is much smarter that it looks on the surface. Give it time and it will pull you in.

Unbelievably amateurish, shit this bad can normally only be produced by The Asylum. No suspense, no scares, everything is terrible, particularly the acting, two-dollar CGI, and incredibly lame string creature. Only plus is some pretty good looking women in bikinis in the lead roles, which obviously was the only requirement for the parts.