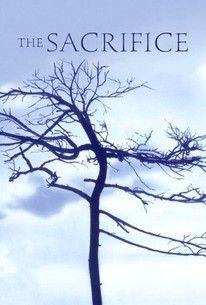 The Sacrifice, director Andrei Tarkovsky's final film, begins in Bergmanesque fashion on a small, remote island, where friends and family gather for drama critic Alexander's (Erland Josephson) birthday celebration. The revelry is interrupted by a radio announcement: World War III has begun, and Mankind is only hours away from utter annihilation. Each of the guests reacts differently to the news: the most dramatic response is Alexander's, who promises God that he'll give up everything he holds dear--including his beloved 6-year-old son -- if war is averted. Allan Edwall, a local mailman with purported mystical powers, offers to intervene with the Creator on Josephson's behalf. The Sacrifice is so dependent upon its visuals and overall mood that any attempt at a detailed synopsis would be woefully inadequate. The willingness of Tarkovsky's protagonist to forego all his possessions may well have sprung from the cancer-ridden director's awareness that he, too, would soon be giving up everything to face his Maker. The Sacrifice won four awards at the Cannes Film Festival, including the Grand Prix.

Critic Reviews for The Sacrifice

This is pure Tarkovsky, with all the perfectly composed long camera takes and ineffable mystery of the soul that defined his work.

In The Sacrifice, the cryptic Tarkovsky style helps create a towering cathedral.

As The Sacrifice comes full circle, returning to that spindly tree by the sea and its nurturing, the film itself emerges as a symbolic gesture of great emotional impact.

Only those who still quiver at the shopworn lament that advancing technology is destroying the world will find the philosophizing vital in this bookish stupor.

A grand, unworldly, even antiworldly religious vision that depends on its perfect pitch to avoid absurdity and bathos.

It's long, stately and po-faced (all reasons why Tarkovsky seems faintly unfashionable these days), but if it's extended, beautifully composed tracking shots you want, he's your man.

A film by a genius because of its gravity and difficulty, packed with a conceptual density and bearer of a quiet scream of a desperate optimism. [Full Review in Spanish]

A stunning and brilliant summation of a legendary career, and Kino's sumptuous treatment of it is befitting of its stature in cinema history.

I was fascinated by the unusual elements on display - the inscrutable story structure, the deceptively complex long takes, the way that clashing visual and narrative philosophies bleed into each other with a dreamlike logic.

There are echoes of Bergman (of course) and of Chekhov, and once or twice I found myself thinking, most unexpectedly, of Heartbreak House.

Tartovsky's last film is a lyrical plea for spiritualism and a warning about the dangers of runaway science.

The dread chill of the film is a stark reminder of the zeitgeist at the time, which was full of nuclear doom.... What constitutes the tragedy here is what is left open to question.

Audience Reviews for The Sacrifice

Beautifully acted, directed and told The Sacrifice is a brilliant final work from legendary Russian filmmaker Andrei Tarkovsky. I've given my fair share of praise of his work, and with good reason because every picture that he has made has had the scope of fine filmmaking that only a select few could replicate. The only filmmakers that come to mind when comparing his work is Sergio Leone and Stanley Kubrick, because Tarkovsky tended to make truly spectacular films, films that made a significant impact on cinema. With The Sacrifice, being his final work before his death the same year of its release, Andrei Tarkovsky crafts a fine final film that is just as good as all his previous films. The picture is poignant, beautiful, well crafted and everything about it resonates with the vibe that Tarkovsky has been known for. Crafting a stunning feature with a simple, effective story, yet he takes his time for the plot to unfold and he uses the images to really tell the story and in doing so, The Sacrifice is elevated in terms of a fine work of filmmaking by a pure craftsman that was always able to make masterful, brilliantly shot picture that stood out. How does this film rank among his masterpieces such as Solaris and Stalker, it's definitely up there, and for me anyways, it's a film that is almost perfect, and Tarkovsky again displays storytelling with the basic ideas but he uses the power of vivid, captivating performances along with the powerful imagery to really engage the viewer and suck him into a highly memorable picture that is a brilliant way to end a stunning, legendary career. The Sacrifice is a great picture, and Tarkovsky and it's hard to believe that this was his final film before he died. However, if you're wondering, Andrei Tarkovsky ended his career on a high note, and The Sacrifice is a poignant, evocative and unforgettable drama that is a must watch if you've enjoyed most of his work.

First Andrei Tarkovsky movie I've seen, and his final feature. Will definently be looking forward to seeing more of his movies in the near future.This one concerns a theatre critics birthday party amongst close family and friends. When a news broadcast announces that WWIII has begun and nuclear holocaust is imminent. the attendees at the part react in various ways. Most extreme is Alexander who offers to sacrifice his family, his house and his son for this to reverse itself. So much of why this film works is based on its extreme minimalist approach and the mood it evokes, making a plot synopsis that is much more descriptive of what this movie is irrelevent. Apparently there are only 115 shots in this movies 2.5 hour run time, with shots that go on from 6-8 minutes commonplace. The opening shot lasting 9+minutes. So if you don't want to watch a movie that moves really slowly you might want to avoid this one. The cinematography is perfect though, and the minimalist approach i found really emotive. Definently a must see for more adventurous film fans.

[font=Century Gothic]"The Sacrifice" starts out with a famous journalist, Alexander(Erland Josephson), celebrating his birthday with friends and family. Interrupting the celebrations, is a catastrophe which may signal the end of the world.[/font] "The Sacrifice" has some very interesting things to say about faith but it takes a wrong turn about half way through and never recovers. It is also a perplexingly plodding piece of work that goes on for much too long. Andrei Tarkovsky's decision to film a good deal of the movie in long shots makes it almost impossible to identify with any of the characters. Sven Nykvist's cinematography is certainly pretty enough to look at, though.