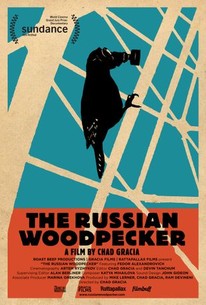 A thrilling investigation into the ghosts of the Soviet Union and the mind of an irradiated Ukrainian artist on a quest to discover the 'criminal' behind the Chernobyl nuclear disaster. Unforgettably eccentric artist Fedor Alexandrovich begins his quest by revealing to the world an enormous secret Soviet weapon that stands in the shadow of Chernobyl, and which Kremlinologists in the 1980s thought might be a giant mind-control device. But what Fedor discovers is much more sinister. While his theory that Chernobyl was an inside job may seem mad, the audience too starts to question reality when secret police appear and one of the crew members is shot by a sniper, as revolution, paranoia and terror engulf the crew. This Sundance Grand Jury winner and darling of critics worldwides pushes the boundaries of the documentary form while telling a crucial story about the deadly dance between Ukraine and Russia, and hinting at what Putin has in mind next.

News & Interviews for The Russian Woodpecker

Bridge of Spies Is Certified Fresh

View All The Russian Woodpecker News

Critic Reviews for The Russian Woodpecker

An investigative political documentary with a lion heart and a funny bone.

Alexandrovich's ideas are poised to be embraced by a wide swatch of conspiracy theorists as this film continues to be discovered and debated.

Mr. Gracia's messily structured film works best as a document of fear in today's Ukraine and as a kind of ghost story about the Soviet Union.

The Russian Woodpecker is only valuable as entertainment, though the absence of any equivalent to the Zapruder film or allegedly suspicious NASA photos means there's not much visual interest.

Stark and surreal, farcical and fearful, The Russian Woodpecker is an electrifying film about Cold War legacies that becomes frighteningly topical when viewed through the lens of European current affairs.

The Russian Woodpecker is an arresting, thought-provoking and seismically important creation...

The relationship between the Soviet Union and Ukraine takes on almost unbelievable twists and turns in this film.

This assertive film reaches out beyond just the usual folks who take to conspiracy theories.

A documentary with no easy antecedents, The Russian Woodpecker is at once a glance inside a wondrous mind, a journey back into the twisted mire of the Cold War and an experience that can't stop provoking questions.

Audience Reviews for The Russian Woodpecker

There are no featured audience reviews yet. Click the link below to see what others say about The Russian Woodpecker!