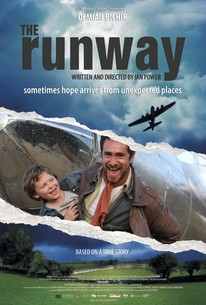 In this charming comedy, Demián Bichir stars as Ernesto, a Colombian pilot whose plane has crashed in a small Irish village. Not able to speak a word of English, a precocious 9-year old boy named Paco, the only one in his town who knows Spanish, becomes his translator. Rewriting Ernesto's mysterious and questionable past, Paco turns him into a hero and a celebrity, motivating the entire town to rally behind Ernesto to help rebuild his plane. When a seedy Colombian detective arrives and threatens to reveal a dark secret about Ernesto, the town begins to question who they can trust. Inspired by true events, The Runway tells the story of a boy needing a father, a man wanting a family, and a town willing to do anything for a hero. -- (C) Tribeca

Pat Laffan
as Manus
View All

Critic Reviews for The Runway

The eccentric characters and wacky story line are merely camouflage for a movie with a heart that's pure Hollywood.

Irish villagers rally to the aid of a stranded Colombian pilot in this quirky comedy.

It's the feel-good stuff that directors dream of, and Ian Power's directorial debut has a broad, gentle appeal that will please all.

Inspired by a true story, this Disneyish sally to the crash site that spawned a miracle lacks the muscle of reality.

Adventurous and engaging, particularly for those who love Irish cinema

Audience Reviews for The Runway

This is a good, if rather unimpressive, film. It certainly has a lot of heart and an absolutely gorgeous and quaint Irish village. I don't really have much to say about this film, it's got a damn good cast and some funny moments, it's never hilarious but it has some good jokes. Cliched jokes, the language barrier, cultural differences, etc, but some funny jokes nonetheless. It isn't consistently funny either, but I can't complain. The story is well-told and sees Paco connecting with and befriending Ernesto, whose plane crashes in his village, because of his father's absence. Paco also gets the entire village, by making up stuff about Ernesto in order to make him look heroic, to help fix Ernesto's plane in order to get him back home. It's good but, again, not particularly impressive. You've seen this type of story before and you will see it again, and probably done much better than this. I liked the movie, but I never felt like Paco and Ernesto truly made a connection, I find that this film is lacking emotional depth. I still think the film is charming, thanks to its setting, and its quirky characters but it didn't really always click with me. Perfectly solid movie though, just one that should've been better all things considered. A good movie that you'll forget about in a week's time.