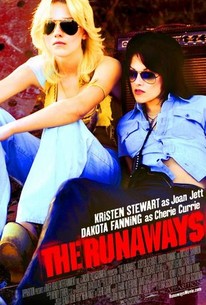 Critics Consensus: Viewers expecting an in-depth biopic will be disappointed, but The Runaways is as electric as the band's music, largely thanks to strong performances from Michael Shannon, Dakota Fanning, and Kristen Stewart.

Critics Consensus: Viewers expecting an in-depth biopic will be disappointed, but The Runaways is as electric as the band's music, largely thanks to strong performances from Michael Shannon, Dakota Fanning, and Kristen Stewart.

Critic Consensus: Viewers expecting an in-depth biopic will be disappointed, but The Runaways is as electric as the band's music, largely thanks to strong performances from Michael Shannon, Dakota Fanning, and Kristen Stewart.

The film follows two friends, Joan Jett and Cherie Currie, as they rise from rebellious Southern California kids to rock stars of the now legendary group that paved the way for future generations of girl bands. Joan and Cherie fall under the Svengali-like influence of rock impresario Kim Fowley, played by Michael Shannon, who turns the group into an outrageous success and a family of misfits. With its tough-chick image and raw talent, the band quickly earns a name for itself -- and so do its two leads: Joan is the band's pure rock' n' roll heart, while Cherie, with her Bowie-Bardot looks, is the sex kitten.

Adam Silver
as Boy in Audience

Koji Wada
as Announcer
View All

News & Interviews for The Runaways

View All The Runaways News

Critic Reviews for The Runaways

The audience is meant to relate to Jett's indignation-the band's success should hinge on their sound, not their looks-but it feels like a bogus position, since we, in watching the scene on the lawn, have been made complicit in Cherie's objectification.

It's not so much a shock to the system as a series of practised strokes, yet -- for moments at a time -- it makes you squirm happily in your seat.

Given that the band were more about attitude than music, there's not a lot of substance here.

Fanning captures Currie's surly "Cherry Bomb" style effectively, particularly when dolled up in the notorious white basque that Currie is remembered for; Stewart is even better as the furiously smouldering Jett.

Maybe The Runaways is Linson's way of showing that he can make a success of this subject, and I think he has done, with a film which shows how brutal and sexist rock'n'roll is.

Exuberant and aggressive but also questionable and ambivalent.

There are some wonderful emotional developments between these young women, forming bonds off stage, before kicking ass on. They are thrust into unknown territory while navigating their own sexuality and identities, and that's the real heart of the film.

The Runaways is as stylishly honey-toned and authentically grubby as it is kick ass in its portrait of female energy chained to the universally cathartic force of rock 'n' roll.

It's a too-familiar rags-to-riches-to-rags tale without much substance. But it looks and sounds good, and now and again it rocks.

The acting makes this movie. Too often in a music movie the soundtrack takes first precedence, but here the acting is the center of the movie.

I find it the worst kind of form over function, in which all involved seem to have forgotten that the aesthetic rebellions of the time stemmed from a deeper defiance of the status quo.

Audience Reviews for The Runaways

Sex, drugs and rock'n roll get the once over in this nearly Disneyed take on the Runaways. There's "shocking" as two girls in their underwear kiss!!! They trade pills, but not boyfriends. Only the manager, Shannon as Fowley, seems cut from cloth made of something real, so see it for his performance as opportunist manager.

Kristen Stewart at her best. and Dakota Fanning is amazing as usual.

This wasn't very good. Maybe I'd have been more entertained if I actually cared about the people portrayed in the movie. Then again, if I did, I'd be disappointed because this movie doesn't delve very deep into anything. It's just there. Weak effort. Unless you're a fan of the band, avoid. And if you are a fan of the band, reevaluate your taste in music.

The opening scene. A drop of menstrual blood hits the pavement. It´s not necessary much more to understand that it´s a movie about girls. With a sort of disappointment, I already knew what to and what to not expect, an apprehension confirmed right in the next scenes, dialogues between the sisters. It´s not only a film from a girl´s point of view, but it is also like any other music biography we´ve already seen. Something like: turn up the sound and (try to) enjoy it. The film tells the story of the beginning of the band, its success and fall, but it´s not exactly a film about The Runaways. It focus on Cherie Currie and Joan Jett, letting Lita Ford, Jackie Fox and Sandy West "in the backstage", being West the only one who has more scenes with them. With the exception of Cherie Bomb and I Love Rock N´Roll, we don´t see a daily band routine, the artistic process of writing and arranging songs, what would be more interesting than the pattern "sex, drugs and rock n´roll". Yes, it´s the year of 1975, they are the first all-girl rock band, but all this we already know. It´s difficult to conceive that so young girls had so much freedom to do whatever they had in mind when we look to Dakota Fanning, still too "little" girl to convince us that she is the fox we've been waiting for. However, the times are others. If the real Runaways looked like what today would be twenty something, Fanning and Stewart fits perfectly into those seventeen years old. Cherie Currie was much wilder for sure (what can be perceived in her voice) but Fanning makes a great job. Like I´ve read somewhere , she is making the transition from child actor to a grown up actress in a strong way. Speaking about looks, if you, like me, didn´t really know The Runaways, but in the other hand knew The L Word, Kristen Stewart will look so much like Shane that will be hard to properly enjoy or take in consideration her portrait of Joan Jett. Too bad! After watching some old videos of The Runaways on youtube, I can say she is very good as Jett. Watching their live in Japan, in 1977, it´s incredible how Scout Taylor-Compto is very alike to Lita Ford.