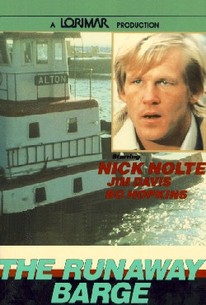 In this feature-length pilot for an unsold TV series, Bo Hopkins, Tim Matheson and Jim Davis star as Ezel, Owens, and Buckshot, three men carving out a living as the owners of a Mississippi river tugboat. Balancing comedy with melodrama, the story manages to involve our heroes with a gang of hijackers and kidnappers. The film originally aired March 24, 1975, on NBC. For its subsequent overseas release, The Runaway Barge was retitled River Bandits.

Tim Matheson
as Danny Worth

Critic Reviews for The Runaway Barge

There are no critic reviews yet for The Runaway Barge. Keep checking Rotten Tomatoes for updates!

There are no featured reviews for The Runaway Barge at this time.