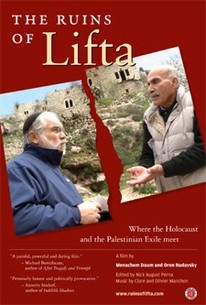 The Ruins of Lifta Photos

Menachem Daum, an elderly Orthodox Jew from Brooklyn, tries to bring together Arabs and Jews for an effort to rehabilitate a Muslim cemetery in the Palestinian village of Lifta. In the process, Daum learns of his uncle's complicity in driving Arabic citizens from their land in the aftermath of the 1948 Arab-Israeli War.

Critic Reviews for The Ruins of Lifta

Watching these sturdy carriers of suffering inevitably argue, your spirits may sink. But you also can't help but notice that the rocky terrain requires them at times to hold on to each other.

A thoughtful lesson in history - and listening.

The Ruins of Lifta offers a muscular example of ability of documentaries to make the political intensely personal. More painfully, it's also a case study in the limits of benign intention.

Not as powerful as Promises, as shocking as Budrus or as extensive as The Settlers, but but at least it humanizes the Palestinian-Israeli conflict and helps to promote intellectual discussion.

Though sometimes infuriatingly naïve and myopic, documentary finally succeeds by opening up some space for honest dialogue.

Although in many ways an unrealizable project, Menachem Daum's attempt at reconciliation with Palestinians is a reminder that Jewish ethics is not necessarily a contradiction in terms when it comes to Israel.

Provocative, if a tad disingenuous, documentary about Lifta, a Palestinian village that was abandoned in the wake of the 1948 Arab-Israeli war and now lies in ruins.

There are no featured reviews for The Ruins of Lifta at this time.

The Ruins of Lifta Quotes