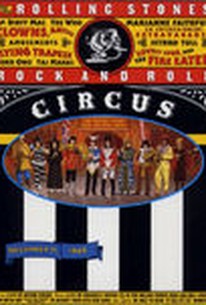 Originally filmed in December 1968, "The Rock and Roll Circus" was originally intended to be released as a television special. The special was filmed over two nights and featured not only the Rolling Stones but The Who, Jethro Tull (with future Black Sabbath guitarist Tommy Iommi filling in for the recently departed Mick Abrahams), Marianne Faithful and an all-star jam featuring John Lennon, Eric Clapton, Keith Richards and Mitch Micthell.

Critic Reviews for The Rolling Stones Rock and Roll Circus

An incredible timepiece concert film that's a window into the rock scene of the 1960s.

Spiffily restored and bursting at the seams with extra features. One-third of the performers were on heroin, including John Lennon.

Audience Reviews for The Rolling Stones Rock and Roll Circus

Rolling Stones and The Who aside (great enough right), there is a GEM of a segment where John Lennon, Keith Richards, Eric Clapton and Mitch Mitchell (Hendrix's drummer) perform "Yer Blues" from The White Album. This cannot be overvalued because of the rare live performances by any Beatle until Wings came out. This supergroup does one more song, but of course Yoko ruined it with her weird vocal experiments. Also you can see Black Sabbath's Tony Iommi when he was briefly with Jethro Tull.

keith moon singlehandedly blows everyone out of the water. good rockin.