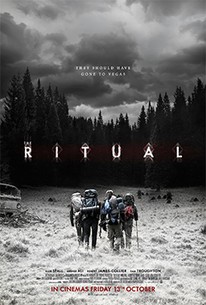 Critics Consensus: Director David Bruckner makes evocative use of the Scandinavian setting and a dedicated cast to deliver a handsome -- if familiar -- horror story.

Critics Consensus: Director David Bruckner makes evocative use of the Scandinavian setting and a dedicated cast to deliver a handsome -- if familiar -- horror story.

Critic Consensus: Director David Bruckner makes evocative use of the Scandinavian setting and a dedicated cast to deliver a handsome -- if familiar -- horror story.

Following the sudden, violent death of their best mate, four young men reunite for a hike through the Scandinavian wilderness. Deep in the black, Nordic forest they find themselves lost in a hell of sinister nightmares and pagan sacrifices. For these ancient woods are home to a malevolent deity which will force them to face the darkness inside themselves.

News & Interviews for The Ritual

View All The Ritual News

Critic Reviews for The Ritual

The most disappointing kind of bad horror movie: the kind that's too smart to be this dumb.

Efficient and highly effective in its style, relying on sound, creepy production design, and the men's own fear and misjudgment to create the sense of pervasive doom.

The Ritual, too, on occasion achieves a tense and devilish power, leaving you in the dark with these guys trying to figure out what that thing can mean. In these moments, the forest seems wilder than it is.

Attempts to put a twist on the Blair Witch formula but demonstrates surprisingly little imagination.

[Rafe Spall is] daringly dislikeable, which is the film's boldest decision, but there's enough texture to the role that you root for him to realise his own value and man up.

A superior B-movie shocker set in the hinterlands of northern Sweden.

It is a haunting film, with immaculate direction, impressive creature design, as well as well-acted and well-realised characters.

This is a well-done horror film, with authentic notes of grief and guilt, gorgeous trackless woods smoking with mist, and creature design which offers real pleasurable terror.

The lack of personality of the protagonists gives a certain abstract and essential quality to the film. [Full Review in Spanish]

The Ritual is about the rituals through which we put ourselves to dull our mistakes and weaknesses, and also those that allow us to break free of them.

The Ritual develops a sense of dread and consistently ups the ante, dragging us through the woods towards a climax that is both unexpected and riveting.

If you think The Ritual is like every other movie, just have a little patience. I assure you it's not. Insanely creepy 'horror in the woods'. [Full review in Spanish].

Audience Reviews for The Ritual

Bruckner is a filmmaker to watch, this is one relentless horror film that never lets you breathe. The script is very strong and the actors are cast perfectly. One of the biggest issues I had though, the cliché of the actor being injured and the annoying part where characters ignore the obvious truth of their situation. The atmosphere is unsettling and with each beat, you are taken deeper into the woods and you never have that safe feeling. I was going to miss this but the trailer convinced to watch and I must say it was definitely worth checking out, one of the better Netflix titles of 2018. 17-03-2018.

I'm sorry, but who the fuck, with no promotional material, and with a name as generic as The fuckin' Ritual, told this movie, it was allowed to be so good?

A group gets lost in the woods at night --- the Swedish woods, in Sweden mind you, and you KNOW what that means. It means lots if scenes with flashlights pointed at trees in the dark and people saying "did you hear that? There's something out there!" Where have I seen this before? Oh, its Blair Witch, only with English accents this time and they're in Sweden! Apparently the English consider Sweden their equivalent to back country rural America! I didn't know that. Because otherwise I got nothing from this. See it if you haven't seen Blair Witch.