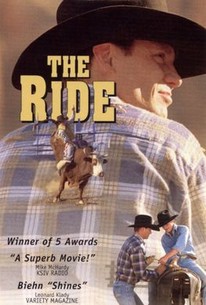 In the 21st Century, even the rodeo has changed with the times, and while bull riding used to be a small-time sport that didn't draw big crowds outside the Southwest, The Professional Bull Riders circuit has turned it into one of America's fastest growing sports. Dressed up with music, pyrotechnics and theatrical flair that has more in common with professional wrestling than the old-time rodeo, the PBR has brought a new sense of spectacle to bull riding, and the champions can now earn seven-figure salaries, but despite it all they remain cowboys, men who follow their own path and face danger in search of glory. Filmmaker Meredith Danluck offers a look into the PBR's big show and the man who make it happen in the documentary The Ride; along with footage of major PBR events, the film profiles the riders and their families, as well as the organizers of the PBR and the guys who take the show all around the country. The Ride received its world premiere at the 2010 South by Southwest Film Festival. ~ Mark Deming, Rovi

Franklin Graham
as himself
View All

Critic Reviews for The Ride

There are no critic reviews yet for The Ride. Keep checking Rotten Tomatoes for updates!

There are no featured reviews for The Ride at this time.