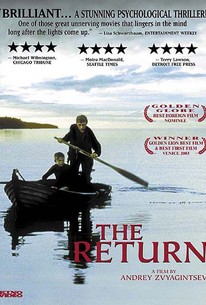 Russian filmmaker Andrei Zvyagintsev makes his feature-film debut with the bleak psychological drama Vozvrashchenie (The Return). Younger brother Ivan (Ivan Dobronravov) and older brother Andrei (Vladimir Garin) live in a small town with their mother (Natalya Vdovina). One summer, the brothers are surprised by the arrival of their long-lost absent father (Konstantin Lavronenko). Although the boys only know him from an old photograph, he still orders them to accompany him on a fishing trip. The stern father then puts his two sons through a series of endurance tests. Doting Andrei is quick to cooperate, while stubborn Ivan is more reluctant to trust him. Ivan wants to know where he's been and what he's up to. After they travel by boat to a deserted island, the father gets even more mysterious. The Return won the Golden Lion at the Venice International Film Festival in 2003.

Critic Reviews for The Return

The story, set in contemporary Russia, seems unexceptional at the start. Yet it plays out against a vast wilderness of shorelines and lakes, and turns tantalizing ambiguity into urgent mystery.

The long and eventful fishing trip Dad drags the boys on is simultaneously a very real voyage through the Russian wilderness and also, like, a Jungian trip, man.

Throughout his expertly controlled film, Zvyagintsev never allows a break in the clouds to provide some reassuring sign that the brothers are on solid footing.

Zvyagintsev gets formidable concentration from his youthful actors, and his storytelling moves with the simplicity -- calm, chiselled, and suggestive -- of a fable.

Constructed like an eerie, metaphorical thriller, this tense, riveting character study offers viewers nearly two hours of emotions with a stunning pay-off no one will be expecting.

The kind of movie you watch between your fingers as you hold your hands up to your face for protection.

Deftly explores the dynamic between father and son and its roots in masculine rage.

Mysterious, compelling, visually inventive, The Return is a quiet but intense metaphysical-drama of great emotional impact and insight.

Like each episode of Kieslowski's Decalogue, The Return is a small but potent story. It leads us to ask: Is it ever enough to just 'trust and obey'?

A harrowing, elusively biblical account… echoes of Abraham and Isaac, the Gospel parables about fathers and pairs of sons, and the Second Coming.

magnificent return of a great cinema tradition to the world stage

Audience Reviews for The Return

It has the stunning, bleak and oppressive beauty found in Andrei Tarkovsky's films, with a cold and blueish cinematography that offers no relief from the underlying tension that is basically omnipresent, and it benefits especially from three excellent central performances.

This family trip moving in a thrilling manner is quiet captivating for what it is, but then somehow I'd got the notion that the genius was going to end it leaving behind pieces for us to put together..... and that didn't suit my taste. Disappointing for what it gives away, but entertaining for what it maintains: the thrill. Wish the mysterious touch was as satisfying as the thrill. Yet, it's still worth a watch IMO. And I've a feeling that you're less bound to be disappointed by the genius touch that disappointed me. P.S. If you feel that the above comment includes any spoiler, kindly note that it's absolutely unintentional. Find one at your own risk and pleasure.

A dark, unsettling look at two boys who struggle to come to grips with their father's (Konstantin Lavronenko) sudden return to their family after a 12 year absence, and how he takes them on a camping trip that turns into a test of each one's masculinity. Although the amount of ambiguity the film contains tends to be a little annoying at the conclusion given the film's unwillingness to give really any answers, director Andrei Zvyagintsev's point is clearly to have you as confused as the boys who are being mentally tortured by their father. Throw in a sudden, shocking twist 3/4 of the way through that is impossible to see coming, some beautiful still photography, and the fact that the actor who plays the older boy (Vladimir Garin) died a day before the film's release due to a similar accident that takes place in the film, it is a very memorable, unmistakably powerful little movie. Not for all tastes to be sure, as this is an art-house film inside and out, but a watchable one.

The Return aka: ??????????? . This is a Russian Film sold by Kino International (Check there website). It fits in the category of World Cinema. It is in Russian with English Subtitles. The director Andrei Zvyagintsev has put out 3 other films, all I am told are very good. Each and every Kino International Film that I have watch has been very good. I am sure there are some who would disagree with me, and I am sure there are most wouldn't even pickup a Kino Film. But this one is worth 5 stars, its about 2 boys who come home one day to find their father who has been out of there life?s for 12 years, no explanation as to where he has been, sailor, prisoner, or gangster, we do not know or are we told. The father takes the boys on a trip, one boy shows his father respect and is kind, the other hates the man and makes his life miserable. many twist throughout. Its a must see, acting is beyond, above the bar, nothing but great. 5 stars nothing less, put away Spiderman and pick up a different film, once you see one of this type you might not go back to the common stuff. Its in my collection.