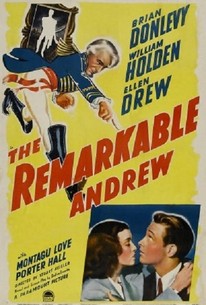 Andrew Jackson is very happy to serve as the secretary of the society that honors his presidential namesake until he is arrested for embezzling from the town coffers. With no one to speak on his behalf, poor innocent Jackson is tossed into jail. There he finds himself haunted by several ghosts, including Presidents Andrew Jackson, George Washington, Benjamin Franklin, Thomas Jefferson and Supreme Court Justice John Marshall. Each of this sagacious specters offers his advice to the incarcerated Andrew. Then Jesse James shows up and helps Andrew, the only one who can see them, escape and with their help, bring the real crooks to justice. When not helping Andrew, the ghosts have great fun adjusting to the modern world. ~ Sandra Brennan, Rovi

Hobart Cavanaugh
as Teller/witness
View All

Critic Reviews for The Remarkable Andrew

A refreshing and completely likable jape.

A true wonder in terms of its performances, especially by William Holden and Brian Donlevy, the protagonists. [Full Review in Spanish]

It was the kind of plot that might serve well today for a 30-minute situation comedy, though it was stretched to 80 minutes for the film, and audiences found it wanting.

There are no featured reviews for The Remarkable Andrew at this time.