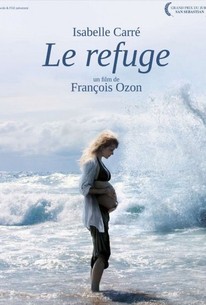 Mousse (Isabelle Carre) and Louis (Melvil Poupaud) are young, beautiful, rich and in love, but drugs have invaded their lives. After Louis fatal overdose, Mousse soon learns she is pregnant (actress Isabelle Carr was pregnant while shooting.) Feeling lost, Mousse escapes to a beautiful beach house far from Paris and is soon joined in her refuge by Louis gay brother, Paul (French singer Louis-Ronan Choisy in his first screen appearance). The two strangers gradually develop an unusual and deeply moving relationship as Ozon continues his unique exploration of the nature of family and blood ties. -- (C) Strand Releasing

Claire Vernet
as The Mother

Jean-Pierre Andréani
as The Father

Marie Rivière
as The Woman on the Beach

Jerome Kircher
as The Doctor

Nicolas Moreau
as The Seducer

Emile Berling
as The Drug Dealer

Maurice Antoni
as The Priest
View All

For a time in her life, a woman's pregnancy is the most important thing about her. That is the subject of Hideaway.

Gradually, Ozon and the actors convince us of the reality of this world and persuade us to watch the film on its own, unforced terms. Nothing much is happening, except life.

Hideaway" is a spellbinding film, and Ozon, who is perhaps best known for the much darker Under the Sand and Swimming Pool ... continues to be an inspiring director of actors.

One of the pleasures of Hideaway (Le Refuge), from François Ozon, an erratic talent of satisfying films like Under the Sand and misfires like 8 Women, is its insistence on ambiguity.

Sometimes a movie makes a point that's been made before, but makes it so beautifully and so quietly that it feels like you're discovering it for the first time.

Surely, Ozon had Rohmer in mind when he co-wrote and directed this lovely film.

Strikingly beautiful and surprisingly hopeful, Hideaway had me feeling like I knew the two characters personally, and I left wishing them the best.

Ozon masks his lack of sensitivity to the material with his characteristic cerebral detachment and pretense to subtlety.

It is undeniable that Ozon has an eye for emotion. His low-fi camerawork and pared-down cinematography keep a beautiful realism surrounding his characters.

So few films are made about pregnancy and childbirth; few discussions are held about it without the phrases 'pro-choice' or 'pro-life' being shouted over the top. The time we spend with the complex Mousse ... allows us to ponder these miracles in full.

Death, relationships, life, homosexualism, family, being a mother, a country house near the beach. All the recurring themes in François Ozon's films are seen in Le Refuge, where he works again with Melvil Poupad and Mari Rivière in small roles. Rivière's character and scene made me believe for those brief minutes that I was, actually, seeing a Rohmer's movie. I haven't noticed it before, but there's a lot of Rohmer in Ozon's films, though Ozon can be very melodramatic sometimes while Rohmer was a genius in his vision of the ordinary. Isabelle Carré, who was really pregnant during the shoot, gave to the film more realism and some very beautiful scenes.

I adore these kinds of films; character driven, well acted, uncomplicated in terms of plot, emotive and perceptive. The French seem to do them especially well. Isabelle Carré, who really was pregnant during filming, is a revelation in understatement - if that isn't a contradiction in terms. She is wary but not shy, delicate but inquisitive, and her reactions are incredibly natural and real. Louis-Ronan Choisy complements her very well as the gay brother of her dead lover - he has a haunted quality in some of his scenes but radiates warmth. Mathieu Hippeau and François Ozon's screenplay is excellent and Mousse's "self-rehab" from drug addiction is handled sensitively and non-sensationally (very different from the melodramatic methods used in most Hollywood films) - she simply gets on with it and tries to make the best she can of an awful situation. I was also very impressed with the ambiguous & open ending that successfully gives closure whilst making no promises of happiness, just hope. François Ozon, a director of immense skill and versatility, has made an unshowy, unforced film on addiction, birth and rebirth, no mean feat. Le Refuge is excellent stuff.

Sensitive, beguiling tale of a women's struggle with a solitary pregnancy and drug rehab which perhaps underplays the horrors of withdrawal but scores for tackling the female experience of pregnancy. This works thanks to a multilayered performance from Carre and hauntingly fragile silent stares which speak volumes.

In "Le Refuge," a mother(Claire Vernet) discovers her son Louis(Melvil Poupaud) prostrate on the floor of a disused apartment in Paris, having overdosed from heroin. He does not survive but his girlfriend Mousse(Isabelle Carre) does after being in a coma for six hours, having sampled the same heroin cut with valium. She also finds out she is pregnant and is offered replacement therapy(methadone). However, Louis' mother would kindly like her to get rid of it. Months later, Mousse is laying low at the house of an ex-lover when Paul(Louis-Ronan Choisy), Louis' brother, comes to visit on his way to Spain. After an intense beginning(if you hate needles, then this might not be the movie for you), "Le Refuge" settles down to be sensual and sublime right down to its stunning ending while it unearths a divided family dynamic. Not only are Louis' parents divorced but there is a clear break between past and present. The mother can only think of Louis when he was innocent and would probably try to kill Mousse, who she wrongfully blames, if there was not a small chance they would be buried together. Paul at least makes the attempt to learn about how his brother turned out while Mousse learns about the younger Louis from him. All the while, she is slowly emerging from her shell, spending more time in public and getting used to be looked at again. Paul apparently does not in a certain way which is why she thinks he is gay. And it might be considered a little unusual that she is hit on in her condition by a stranger, since that usually means that a woman is attached, which is not the case with Mousse. (Originally reviewed as a blog entry on March 23, 2010.)