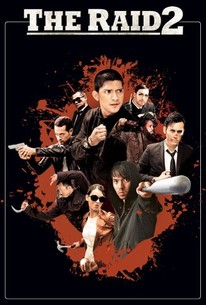 Critics Consensus: Although its high-energy plot and over-the-top violence may play better with genre aficionados, The Raid 2 definitely delivers more of everything audiences loved about its predecessor.

Critics Consensus: Although its high-energy plot and over-the-top violence may play better with genre aficionados, The Raid 2 definitely delivers more of everything audiences loved about its predecessor.

Critic Consensus: Although its high-energy plot and over-the-top violence may play better with genre aficionados, The Raid 2 definitely delivers more of everything audiences loved about its predecessor.

He thought it was over. After fighting his way out of a building filled with gangsters and madmen - a fight that left the bodies of police and gangsters alike piled in the halls - rookie Jakarta cop Rama thought it was done and he could resume a normal life. He couldn't have been more wrong. Formidable though they may have been, Rama's opponents in that fateful building were nothing more than small fish swimming in a pond much larger than he ever dreamed possible. And his triumph over the small fry has attracted the attention of the predators farther up the food chain. His family at risk, Rama has only one choice to protect his infant son and wife: He must go undercover to enter the criminal underworld himself and climb through the hierarchy of competing forces until it leads him to the corrupt politicians and police pulling the strings at the top of the heap. And so Rama begins a new odyssey of violence, a journey that will force him to set aside his own life and history and take on a new identity as the violent offender "Yuda." In prison he must gain the confidence of Uco - the son of a prominent gang kingpin - to join the gang himself, laying his own life on the line in a desperate all-or-nothing gambit to bring the whole rotten enterprise to an end.(c) Sony Classics

News & Interviews for The Raid 2

View All The Raid 2 News

Critic Reviews for The Raid 2

It is adolescent male wish- fulfillment fantasy of the most retrograde kind but, as action cinema, the Jakarta-set thriller The Raid 2 is riveting fare.

Men snap, crackle and pop before our eyes, their broken bones part of the gloriously kitsch, balletic fun.

If The Raid 2: Berandal doesn't end up as the most violent movie to hit screens in 2014, it won't be for lack of trying.

Two and-a-half hours may seem like a lot for an Indonesian crime saga, but "The Raid 2" has a sweeping scope that justifies its running time. And it will knock you out.

For those of us who believe the prime directive of action pictures is that such movies ought to, by gawd, move , Gareth Evans is our new patron saint.

[Gareth Evans] attempts to transcend the action genre, and despite not hitting every mark he's aiming for, the fact he's shooting for something grander shows a filmmaker not settling for the status quo.

Dear Hollywood - if you've thought about making a film version of the popular Sega Mega Drive game, Streets of Rage, don't bother yourself. Gareth Evans beat you to it.

"The Raid 2: Berandal" is brutal, bloody, and piled high with some of the most incredible action scenes ever filmed.

Currently, Gareth Evans is not only one of the best directors in the martial arts genre, but he has created a sequel that surpasses its predecessor by a large margin and leaves it as one of the most outstanding in years. [Full review in Spanish]

'Raid assassin 2' has each and every ingredient necessary to be, and continue to be for a long time, the undisputed queen of its category. [Full Review in Spanish]

Way too long, but the fight scenes are absolutely unmatched.

Audience Reviews for The Raid 2

Where the first part restricted itself to the raid on a crime lord's building complex, the second hardly deserves the title anymore. While you can't blame the movie for fleshing out its story with some mob disputes, betrayal and undercover work, the story simply isn't worth the effort. It even takes some impact from the once again impressive fight choreography. Of course, the final car chase and showdown fight still make up for a lot. But in the end you wish you simply would have made to care about any of this a lot more, instead of just being impressed by the fight artists work.

Following on straight after the events of the first movie we are back alongside Rama as he is once again lured into another mission, or should that be used in another mission. The last three members to survive the tower block raid are seen here together again, albeit briefly, as Rama is now wanted for an undercover job. Expect betrayal, blood, broken bones and a whole load of very similar looking characters. Right away this is the problem with this sequel, the plot, its meh. The whole reason why the first movie was so explosive was the excellent story. A special team of elite cops enter a tower block in the slums of Jakarta to bring down a crime lord. They start at the bottom and must work their way up floor by floor taking out scum, the whole premise was solid, tight, tense and claustrophobic, the perfect storm. This sequel sees Rama going undercover to expose a corrupt police official (Reza) who is tied in with criminal gangs, this means getting friendly with a crime bosses son (Uco) in jail and working for the enemy (Uco's father Bangun). Things get complicated when another crime Boss Bejo, obviously wanting power and control, teams up with Bangun's son to try and start a war against a rival Japanese crime syndicate, this act being against Bangun's will. The only reason for this mainly being Uco wants to show his father how strong and dependable he his, to prove himself. The other reason being Bejo thinks the Japanese are trying to sway Reza against the Bangun syndicate. Jesus I had to think about that just writing it! and this is the problem, the plot is really convoluted in my opinion with characters coming out of the woodwork. I've not even mentioned the betrayal twists involving gangs killing their own and then faking reprisals to kick start this war, not to mention corrupt police gangs and undercover cop twists on top! I genuinely had some trouble following what was going on from scene to scene, so many characters all kinda looking the same whilst scenes popped up outta nowhere with little reasoning (Prakoso the assassin I'm looking at you). Its only later on down the line I realised what that previous scene had been about and why, I had to rewatch scenes and read up on sections. It is good that the continuity is there from the start, they had the same two actors from the last movie briefly and it all smoothly crosses into this story which was cool. Alas at no point did I ever really feel the same adrenaline shot that I did for the first film, this could of been any action movie, its a generic plot that's been done before many times and I was actually bored periodically. Of course the movie is all about the fights, this is the movies forte, its reason for being. Does that disappoint? errr...kinda, in all honesty it did in places yes, let me explain. There didn't actually seem to be as many fights in this film, probably because its not set in a confined space, what there was became so outrageous and so long I again found myself getting bored. Yes the first movie had awesome fights that were ridiculous and long but this movie does seem to go that little bit further. You still have tonnes of faceless henchmen getting their asses handed to them on a plate which is standard procedure and fun. But the boss fights almost become a parody and just go on and on and on, the main fight towards the end in the kitchen especially. I realise that's because both characters are highly trained fighters in their art but you get dizzy watching this shit, the director just doesn't know when to stop, less is more guy! The blood and violence is sky high I might add it really is, non-stop bloodbath of epic proportions. Yet again I have to say its too much, less is more, there comes a point when the blood and gore is so extravagant that it loses all impetus, it becomes dull and non-engaging. I really found myself yearning for some good old fashioned fisticuffs that didn't involve various weapons that naturally result in gallons of claret everywhere, and I really disliked the assassins with their specific weapons. Seriously Evans are you trying to be the Asian Robert Rodriguez here? well don't, it ain't a good move. Don't any criminal gangs use guns in this world? would be easier. We all know what this movie offers, you know what to expect and it certainly delivers on that. I can't complain about the violence because the movie is all about pure violence...and a traditional practice involving mental, physical and spiritual development but anyway. My main issue is the fact it just feels like a run of the mill action fest that offers nothing new (accept another look at a newish martial art). The first movie worked really well because of the cracking story, setting and close quarters action, this has none of that, its just a gangster flick with lots of stereotypical stuff in it. Hell even the car chase looked crap, you can clearly see the cars are going quite slow with high speed sound effects dubbed on top. Yes it looks good, yes the fights are impressive when not drenched in blood and yes its a solid achievement for an Indonesian production...but it lacks the quality of its predecessor and just left me numb and weary.

Except for a handful of fight sequences, the movie has nothing to offer.

The Raid 2 is one of the greatest action movies I have ever seen. Gareth Evans has stepped up his already impressive game and with this 2 hours 30 minute action epic, he has proven himself to be a true visionary behind the camera. Where The Raid: Redemption was a kinetic, fight-a-minute thrill ride, its sequel is built around a story. You won't feel its run time because you will be too engulfed in its gritty tale about family, loyalty, betrayal, and identity. Three crime families ultimately end up at war with each other with Rama being caught in the middle as an undercover cop exposing corruption. Amidst the drama are incredibly choreographed, expertly staged, and graphically violent fight scenes. Weapons, hand-to-hand, gunfights, car chases, The Raid 2 has it all and it doesn't let up! There are at least two action scenes that I would rank among the best in recent memory. On a filmmaking standpoint, the film is beautifully framed, edited with skill and precision - it's so nice to see the actors doing their own stunts - and the sound mixing adds entire new dimensions to what an action film can do. The Raid 2 is a masterpiece!