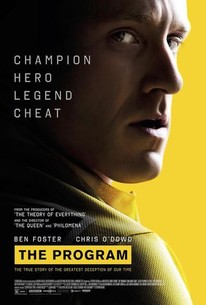 From Academy Award (R) nominated director Stephen Frears (The Queen, Philomena) and producers Working Title Films (The Theory Of Everything, Everest, Tinker Tailor Soldier Spy), comes the true story of the meteoric rise and fall of one of the most celebrated and controversial men in recent history; Lance Armstrong, the world-renowned Tour de France champion. The world needs heroes and Lance Armstrong was the ultimate sporting hero. Following a gruelling battle with cancer, Lance returned to his cycling career in 1999 more determined than ever and with his sights set firmly on winning the Tour de France. With the help of the infamous Italian physician Michele Ferrari and team director Johan Bruyneel, he developed the most sophisticated doping program in the history of the sport. This program allowed Lance and his American teammates to dominate the world of cycling, winning the Tour an unprecedented seven times. However not everyone believed the fairytale...Sunday Times journalist, David Walsh, at first charmed by Lance's charisma and talent, soon began to question whether the 'world's greatest athlete' was 'clean'. Walsh sought to unveil the truth, his ensuing battle with Armstrong risked his own career, ostracised him from the cycling community and cost his paper, The Sunday Times, hundreds of thousands in legal costs. But the indefatigable Walsh eventually uncovered the truth when a select few prepared to talk came forward, exposing one of the greatest deceptions of our time. Inspired by the award winning book 'Seven Deadly Sins' by David Walsh, and featuring a stellar cast including Ben Foster (Lone Survivor), Chris O'Dowd (Calvary), Guillaume Canet (Tell No One) and Jesse Plemons (Breaking Bad), THE PROGRAM is a tense and suspenseful thriller.

Christy Meyers
as US Sports Journalist

News & Interviews for The Program

View All The Program News

Critic Reviews for The Program

The flashily photographed enterprise too often becomes a blur of sound bites and slick aesthetics akin to a Nike commercial.

For a story about incredibly focused determination - and if nothing else, Lance Armstrong had that - the film remains strangely uninvolved.

"The Program" fails to add anything new, or penetrate the soul of so crafty a cheater.

It never goes deep on what it was that produced the awfulness that is Lance Armstrong.

"The Program," much to its detriment, concentrates almost exclusively on the history of the doping effort . There is no mention of his childhood or adolescence or any attempt to analyze his character.

It may not take a groundbreaking approach to biographical drama, but Frears' The Program draws strong performances...

It must be said that Foster excels as Armstrong. Bearing an unnerving physical resemblance to the fallen cycling hero, he is a revelation in a remarkable tour de force -- not France -- performance.

The Program is never less than interesting, and the cast is high-caliber. However, the movie makes us want to know more, rather than come away with the sense that we've been through an experience ourselves.

Foster, though, delivers a strong and convincing performance, and I could watch films about Armstrong and his evil machinations for ever. This one may fail to unearth many of his mysteries, but it is a confident, if understated, offering.

The abiding achievement of the film rests throughout with Foster, who can shift on a dime from the charismatic to the repellent and whose Armstrong is at his most grimly compelling when engaged in an ongoing commentary with himself.

The Program can be viewed as especially relevant, given that doping in sport is coincidentally, in the news again.

Audience Reviews for The Program

This is one of those biopics that tells a story that we all know and doesn't manage the necessary to raise it above its limitations; instead, it suffers from a one-dimensional protagonist that never becomes intriguing and ends so abruptly that it feels like Frears got tired of telling it.

I thought this was a riveting tale of the whole Lance Armstrong doping saga, I am not sure how accurate it was in terms of factual information but it was exceedingly enjoyable.

There is something to a Stephen Frears picture that is always appealing. I never expect much from them, but I typically end up with something pretty great. I've probably watched Philomena a handful of times since 2013 because I tend to show it to people who have never heard of it. The same could be said of The Queen or High Fidelity. These aren't major, milestone pieces, but they are always quenching in a way only Frears can seem to deliver. Maybe I should have went in with those same non-existent expectations to the English directors latest, but either way The Program would probably be something of a minor letdown. This isn't to say the film isn't good, in fact it has a lot of positive things going for it and I honestly wasn't ready to see it come to an end when it did, but the typical pop that comes with a Frears production just isn't at play here. Given Frears had painted a moving and somewhat revealing picture of Queen Elizabeth in his Oscar-nominated 2006 film I thought he might be up to something similar with his Lance Armstrong biopic, but alas there is no alternate version of Armstrong's life that the news reports haven't already divulged. Instead, Frears recounts the highs and lows of Armstrong's career with a compelling flow and solid performances, but nothing to give it that extra oomph to make it something truly special. read the whole review at www.reviewsfromabed.com