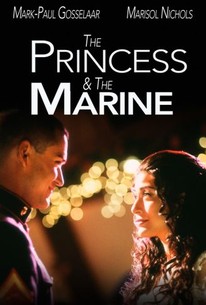 The Princess and the Marine Photos

Its hokey title notwithstanding, this intensely dramatic TV-movie chronicled the true story of the star-crossed romance between Bahrainian princess Meriam Al-Khalifa (Marisol Nichols) and U.S. Marine Jason Johnson (Mark-Paul Gosselaar). Even if Meriam was not already committed to an arranged marriage, her strict Muslim parents would never approve of her union with an American Mormon. Determined to be together, the couple manages to sneak out of Meriam's homeland with forged papers. Will they make it to the United States -- and if so, will diplomatic protocol dictate that Meriam be returned to her own country? The Princess and the Marine made its NBC bow on February 18, 2001.

Sheetal Sheth
as Layla
View All

Critic Reviews for The Princess and the Marine

Anyone who has followed this complicated courtship via newsmags and press clippings will quickly realize that NBC has put aside the intricacies and settled instead for a simple fable targeted to the Britney Spears set.

Audience Reviews for The Princess and the Marine

Pretty entertaining! I was sad to hear their marriage didn't work out, but it was still a good movie.

The Princess and the Marine Quotes