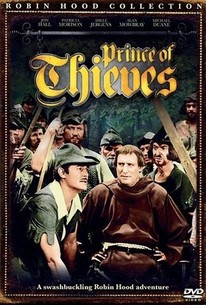 Robin Hood (Jon Hall) acosts Sir Allan Claire (Michael Duane) and his sister Lady Marian (Patricia Morison) in Sherwood Forest, only to learn that they are allies of his friend King Richard, who is away fighting in France. He also discovers that Sir Allan was on his way to claim the hand of his betrothed bride, Lady Christabel (Adele Jergens) -- and is forced to tell his new friend that she is, instead, to be married to the nefarious Baron Tristram (Gavin Muir), all as part of a political maneuver by her father. Robin and Sir Allan vow to prevent the marriage, each for his own reasons, even as the knight's sister -- at first resistant to the bandit's charms -- finds herself falling in love with Robin. But Baron Tristram and his allies aren't so easily thwarted, and the struggle takes heroes and villains alike from the dungeons of Notingham Castle to Robin's stronghold in Sherwood. Among the notable (and, at times, improbable) cast members in this breezy B-movie Robin Hood adventure are Walter Sande as Little John, Alan Mowbray as Friar Tuck, Sid Saylor as Will Scarlet, H. B. Warner as Robin's aging mentor, and comedienne Robin Raymond as a serving girl.

Alan Mowbray
as The Friar

Syd Saylor
as Will Scarlet

I. Stanford Jolley
as Bowman

Critic Reviews for The Prince Of Thieves

The kids may love it, but any adult will just have to sweat it out.

There are no featured reviews for The Prince Of Thieves at this time.

The Prince Of Thieves Quotes