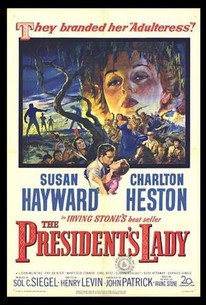 The President's Lady is an historical drama starring Charlton Heston as Andrew Jackson and Susan Hayward as his wife Rachel, Jackson marries Rachel after she divorces her unfaithful first husband (Whitfield Connor), with scandal resulting when the ex-husband refuses to finalize the divorce. Jackson climbs up the military and political ladder, but Rachel is never socially acceptable due to her "tainted" past. Nonetheless, Jackson stands staunchly beside his wife, even fighting a duel for her honor. On the eve of Jackson's presidential election, Rachel dies, but "Ol' Hickory" takes comfort in recalling a marriage that remained happy against all odds. The best sequence in The President's Lady is a comic vignette which explodes the legend of the "pipe-smoking" Rachel Jackson. ~ Hal Erickson, Rovi

Robert B. Williams
as William

Dayton Lummis
as Dr. May

Critic Reviews for The President's Lady

The stars make sincere and energetic but hardly memorable protagonists.

Through it all, Charlton Heston supplies the kind of ammunition to this film that is as loaded as any carbine slung across his broad shoulders.

One of the better biographical films made by Hollywood.

Audience Reviews for The President's Lady

Wonderful retelling of the love story between Rachel and Andrew Jackson. Susan Hayward and Charlton Heston make a perfect team her balance of warmth and grit softens his customary stiffness and rectitude. The ending is a tearjerker deluxe.