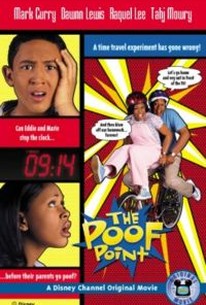 Based on a novel by Ellen Weiss and Mel Friedman, the made-for-cable Poof Point concerns itself with a husband-and-wife team of scientists (Mark Curry, Dawnn Lewis). Having invented a time machine, the enterprising couple manages to foul up the controls to the extent that they gradually become younger, and younger, and younger still, until their teen-aged kids (Tahj Mowry and Raquel Lee) are older than they are! It is up to the kids to reverse the aging process before their flustered parents vanish from the face of the earth. Poof Point made its Disney Channel debut on September 14, 2001.

Olesya Rulin
as Annie
View All

Critic Reviews for The Poof Point

There are no critic reviews yet for The Poof Point. Keep checking Rotten Tomatoes for updates!

There are no featured reviews for The Poof Point at this time.