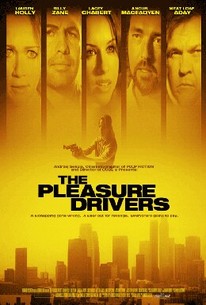 Lauren Holly, Lacey Chabert, Billy Zane, Angus Macfadyen, and Meatloaf all star in Cube 2 director Adrzej Sekula's darkly comic tale of interconnecting lives. The setting is the City of Angels, the players: a deranged kidnapper, a ruthless lesbian assassin, a sociopath call-girl, and a demented cult leader. Daphne (Holly) is an empathetic caregiver who has been tending to the needs of sever head-trauma patient Tom (Angelo Spizzirri). Tom's father is the head of a highly-profitable cult-like church. Though the shady religious sect proves highly profitable, it turns out that the greedy guru has been keeping most of the profits to himself while paying Daphne such a meager wage that she isn't even able to afford Tom's medicine. Frustrated after being refused a raise by the mysterious religious fanatic, Daphne eventually resorts to kidnapping Tom's mentally deficient sister (Steffany Huckaby) as a means of raising the funds needed to care for her helpless patient. Meanwhile, after a neurotic college professor (MacFadyen) is abandoned by his wife for another woman, he sets out on the road with a sexy student (Chabert) who's willing to do whatever it takes to maintain her GPA. When cold-blooded killer Marcy (Jill Bennett) is hired to take out Daphne and put an end to the well-intended kidnapping plot, all three stories come crashing together through a series of shocking coincidences.

Critic Reviews for The Pleasure Drivers

There are no critic reviews yet for The Pleasure Drivers. Keep checking Rotten Tomatoes for updates!

Audience Reviews for The Pleasure Drivers

Such a weird movie! Usually I like weird, but this one was a little much...