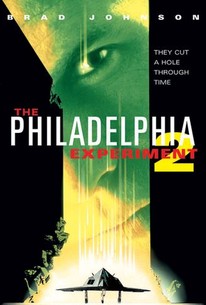 This exciting sci-fi thriller chronicles the further adventures of a 1943 sailor who is thrust into the mid 1980s during an experiment in time travel. Still stuck in his future, the sailor marries and starts a family. His wife dies, and afterward, he begins suffering blinding headaches. Worried, he goes to the scientist responsible for getting him to the future and learns that the scientist has again been toying with his invention. Once again the sailor is caught in a time warp and awakens to find himself several years in the future. By the early '90s, the world has changed dramatically. Now the U.S. is a military state. The sailor cares little for the world's sorry state and is only interested in returning to the '80s to be with his son.

Larry Cedar
as Hank the Controller

Critic Reviews for The Philadelphia Experiment 2

There are no critic reviews yet for The Philadelphia Experiment 2. Keep checking Rotten Tomatoes for updates!

Audience Reviews for The Philadelphia Experiment 2

There are no featured audience reviews yet. Click the link below to see what others say about The Philadelphia Experiment 2!