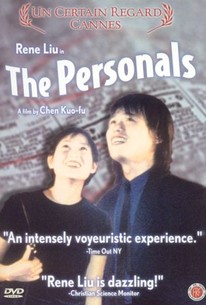 Issues of modern romance and personal identity are played for intelligent laughter in this tart comedy from Taiwan. Wu (played by Rene Liu) is a businesswoman in her early 30's whose professional life is going just fine. It's her personal life that's giving her problems. Since she's not meeting the right sort of man in her daily life, she decides to take the bull by the horns and place a personal ad in the newspaper; she gets over 100 responses to her ad, and much of the film is taken up by her meetings with a variety of men who want to know more about her. Her potential suitors range from a restaurant manager with a shoe fetish and a writer who his brings his mother along to a would-be rock star and a lesbian in male drag. Director Chen Kuo-Fu was a leading Taiwanese film critic in the 1980's before moving to filmmaking in the early 1990's.

Critic Reviews for The Personals

Through all, Liu is a commanding and ever-changing mask of reactions as a woman who observes her suitors as if looking out from the protective shield of a dark-tinted window.

A little like a blind date - sometimes charming, sometimes difficult, never revealing too much at once, and always leaving you with plenty to think about afterwards.

Rene Liu is winsome in this very subtle performance and sympathetic role of a woman suffering from loneliness.

Deals with a quest for love by a Taiwan eye doctor that forces her to confront her deepest confusions.

Audience Reviews for The Personals

a very well acted film starring rene liu and much more complex than the movie description and reviews admit. Comparison to Hal Hartley films are loose. While this film had flashes of comedy, it is better categorized as a drama.