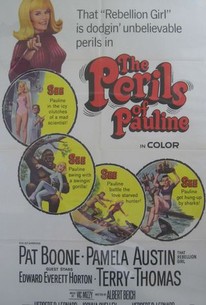 The Perils of Pauline Photos

The Perils of Pauline appropriates the title and nothing else from the legendary 1914 Pearl White serial (and also bears no relation to the 1947 Pearl White biopic of the same name, which starred Betty Hutton). Pamela Austin plays Pauline, a young heiress who finds herself plunked into one peril after another: a typical dilemma has Pauline at the mercy of an adolescent sheik. Pat Boone plays Pauline's millionaire childhood sweetheart, who follows the girl throughout the world to declare his love but who always manages to miss her as she hops from country to country. The best performances are delivered by the supporting cast, including Terry-Thomas, Edward Everett Horton, and comic actor/cartoon voice-over expert Hamilton Camp. "Camp" in fact is the byword of Perils of Pauline, which is deliberately overacted and hoked up in the manner of the contemporary Batman TV series. Perils of Pauline was the pilot film for a projected weekly TV series that underwent several format changes (including one that would have featured Larry Storch as the top-hatted villain) before the producers gave up on the project altogether. The plucky Pauline is played by Pamela Austin, who'd risen to fame in the 1960s as the "Dodge Rebellion" girl in a series of popular car commercials. ~ Hal Erickson, Rovi

Max Kleven
as Gorilla
View All

Critic Reviews for The Perils of Pauline

There are no critic reviews yet for The Perils of Pauline. Keep checking Rotten Tomatoes for updates!

There are no featured reviews for The Perils of Pauline at this time.

The Perils of Pauline Quotes