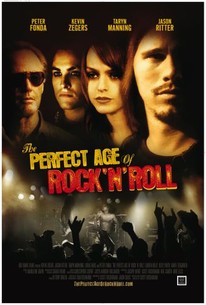 According to rock 'n' roll lore, age 27 is a fateful milestone. From Robert Johnson, Brian Jones, Jimi Hendrix, Janis Joplin, Jim Morrison to Kurt Cobain, all stars we lost at this very age. World famous rock star Spyder (Kevin Zegers) has achieved fame and fortune with a smash hit debut album. This blinding success however, is built on the Faustian pact that capitalized on the genius of his long lost childhood best friend and band mate, Eric Genson (Jason Ritter). Now Spyder retreats to his small hometown after his sophomore effort flops. Reconnecting with Eric after a seven year estrangement, the two recall their youthful ambitions and reexamine the choices they've made. Accompanied by the band's ambitious, fiery manager (Taryn Manning), the legendary music impresario August West (Peter Fonda) and a raucous crew of musicians, they set off on a cathartic journey along historic Route 66 that brings them closer to each other, their history and their destiny. -- (C) Red Hawk Films

News & Interviews for The Perfect Age of Rock 'n' Roll

Critics Consensus: Rise of the Planet of the Apes is Certified Fresh

View All The Perfect Age of Rock 'n' Roll News

Critic Reviews for The Perfect Age of Rock 'n' Roll

Those who go looking for tragic relevance in Scott Rosenbaum's debut indie won't find much to grasp onto.

You'd be better off renting "Eddie and the Cruisers" (1983) than slogging through this latest, far more dire recycling of the same rock clichés.

Some grace notes and riffs ring true, but mainly it plays like a familiar tune on a broken record.

An exhausted pileup of rock-movie clichés, "The Perfect Age of Rock 'n' Roll" presents artistic self-destruction with the solemnity of a movie that has invented a spanking-new genre.

Unfortunately, the unconvincing fictional storyline Rosenbaum weaves around this solid musical base hits every meller cliche in the "self-destructive rock star" playbook.

The director manages to instill every moment on the road with a sense of shrill conventionality.

[VIDEO]...a knock-off of a knock-off movie that has the audacity to attempt to authenticate its rock 'n' roll credibility by casting a giant like Peter Fonda in a supporting role. Shame.

[Despite] a rousing jam with elder blues icons [and] Zegers' showy role. . .story feels like a studied period recreation for the History Channel.

Cliche-ridden and ineptly made...a period piece that would have been moldy even twenty years ago.

belongs in the VH1 vault, never to be heard of again.

Some films are merely tired: This completely unoriginal Almost Famous wannabe is downright exhausted-and exhausting to sit through.

Audience Reviews for The Perfect Age of Rock 'n' Roll

I love movies about bands, and I thought that this movie was very well done. I really like Kevin Zegers, and Jason Ritter, especially. I think they are two young stars who don't get near enough credit for their work. I thought they were great in their roles, and played off each other very well. Peter Fonda was great, also. There are some fantastic bar scenes with some really rocking music, and I would love to find the soundtrack to this. This movie does resemble Eddie and the Cruisers, which I think hurt this movie with the critics. I am no critic, so therefore, I allowed myself to enjoy the ride...

Cast: Kevin Zegers, Jason Ritter, Taryn Manning, Lukas Haas, Peter Fonda, Lauren Holly, Kelly Lynch, Aimee Teegarden, Billy Dee Williams, Ruby Dee Director: Scott D. Rosenbaum Summary: After his second album fails, famous rocker Spyder returns to his hometown to lick his wounds. There, he reunites with his former best friend, a fellow musician, and soon the two set off on a road trip on historic Route 66 with a new band. My Thoughts: "The story is one of betrayal and regrets. Which is common in any Rock n' Roll story. It's not the best Rock n' Roll story I've seen but it's definitely better then some I've seen in the past. But anyone who is a music fan is going to check this film out. I actually enjoyed the story and how it was told. I love Kevin Zegers and Jason Ritter, I think they are two young stars who don't get enough credit for their work. I thought they were great in their roles and played off of each other well. Peter Fonda as August West was great as well and brought wisdom to these young rockers. There are a few great scenes in here, one being the blue's bar scene. The movie has a great soundtrack to boot. So see this if you get a chance."