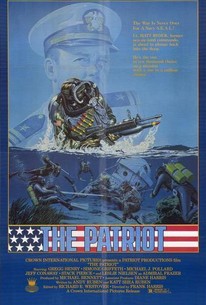 This action film centers around the theft of a nuclear warhead from the U.S. Navy. Lt. Matt Ryder (Gregg Henry) is called out of his dishonorably discharged status and is requested to go find the missing nuke. It appears that the warhead has been stashed somewhere offshore, but it is never clear who has engineered the dastardly deed. When Ryder takes a time-out to get together with his old girlfriend Sean (Simone Griffeth), Sean's spurned and ego-maniacal boyfriend Mitchell (Jeff Conaway) comes forcefully into the picture.

Sally Brown
as Girl in Bar

Paul Nielsen
as Diver
View All

Critic Reviews for The Patriot

There are no critic reviews yet for The Patriot. Keep checking Rotten Tomatoes for updates!

Audience Reviews for The Patriot

There are no featured audience reviews yet. Click the link below to see what others say about The Patriot!